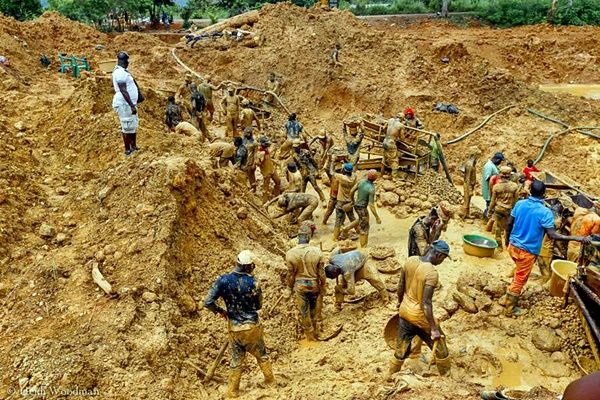 The chiefs and people of Asamang Tamfoe, a farming community near Anyinam in the Atiwa East District of the Eastern Region, have dismissed claims that the youth in the town are involved in illegal mining (galamsey).
At a press conference at Asamang Tamfoe on Monday, the Benkumhene of the town, Nana Boakye Darkwa, said the area had been licensed for a community mining programme which the government launched in June this year.

On Thursday, September 29, 2022, members of the Okyeman Environmental Taskforce and the Kibi Divisional Police Command raided the town and that led to indiscriminate shootings during which some of the young men sustained gunshot wounds and had to be treated at the hospital.

Nana Darkwa, who is also the Chairman of the government’s community mining committee, clad in red band and surrounded by other members of the community, including the youth of the town all of whom were clad in red apparell, said it was unfortunate that the chief of Apapam, Osabarima Okogyeaman Apagya Ofori, should lead the Okyeman Taskforce to direct its members to shoot at innocent young men in the town who were engaged in licensed community mining but not illegal mining.

We will face them squarely

“If they come back to the community, we will face them squarely”, the Benkumhene of Asamang Tamfoe indicated.

Nana Darkwa stressed that if the Apapamhene and the taskforce were actually clamping down on illegal miners, they should have presented themselves to the Benkumhene of the town to announce their presence and intentions.

The Benkumhene pointed out that they failed to do so but rather started shooting indiscriminately leading to many of the youth sustaining gunshot wounds.

He also expressed displeasure with the involvement of the Kyebi Divisional Police Commander, Superintendent Magnus Reindorf Sam, who led the Okyeman Taskforce and called on the Inspector General of Police (IGP), Dr George Akuffo Dampare, to immediately remove the commander from the area because he did not do the right thing.

Most of the youth in the town, who were engaged in government’s community mining, said they were for peace that was why they decided not to physically confront the police and the taskforce.

According to the youth, the community mining concept was the initiative of the President, Nana Addo Dankwa Akufo-Addo, and so the President should call the Okyeman Taskforce and the Kyebi Divisional Police Commander to order.

The Kibi Divisional Police Command together with the Okyeman Environmental Taskforce on Thursday, September 27, 2022 undertook a joint operation and arrested 24 young men suspected to be engaging in illegal mining at Asamang Tamfoe.

The taskforce seized some mining equipment, including excavators.