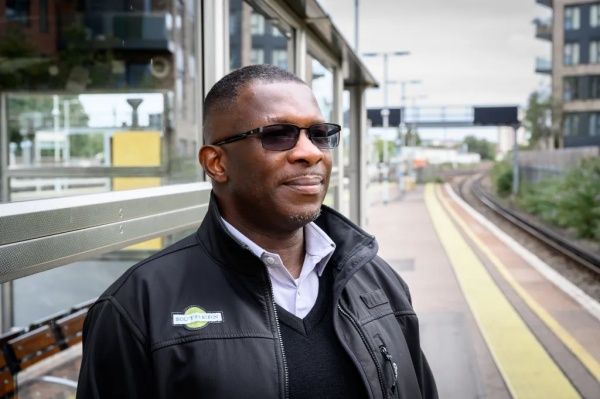 Nat “Sankofa Tete” Arthur is the name. He relocsted to the UK a couple of years ago.

Nathaniel Arthur, from East Croydon, has worked on the railways for three years.

He has twice been involved in life-saving episodes, and his prompt action has been recognised with a lifesaver’s award.

Here, he shares his experience.

“The first intervention I made on the railway was about two years into the job. I had just helped a passenger on to a train and noticed a middle-aged woman on her own crying on the platform.

“She kept looking at our customer information board, but it was clear she was upset.

“I approached calmly and tried to start a conversation with her. But she was reluctant to speak to me. She started to walk away and then boarded one of our trains, but I had a feeling deep down that something wasn’t right. I kept an eye on her and asked my colleague to contact the British Transport Police, who were able to get on the train with her.

“It was clear the lady needed help, so I was glad to pick up on the behaviour even though I was quite nervous as I’d never been in that situation before.

“Unfortunately, I had to make another intervention more recently. Again, I spotted a woman on her own – this time, she was standing extremely close to the edge of the platform, which immediately raised alarm bells.

“I got closer to her and started talking very calmy, asking if she was ok, if there was anything I could do to help. She was adamant that she wanted to stay where she was, it was clear she was very distressed and emotional. I stayed with her, just talking and gradually moving closer and closer to her until I was able to persuade her to move away from the platform edge.

“I stayed and sat down with her talking until the BTP came to help. It was very worrying because she was clearly in a dark place in her life.

“But sadly she’s not alone in feeling like that. I’m grateful to have had the suicide prevention training from work and the Samaritans to help me feel more confident in approaching these situations.

“Working at a station comes with a lot of risks, and you have to be prepared to face a number of situations.

“When my children found out I had received a lifesaver award, they were incredibly proud.”

Nathanial Arthur’s employers, Govia Thameslink Railway, say that if someone is thinking of taking their life, they should contact the Samaritans. The calls can be made at any time and are always free from any phone on 116123, even a mobile without credit and it won’t show up on your phone bill.

Laura Campbell, GTR’s Suicide Prevention Manager, shares the vital Dos and Don’ts that they advise their staff to follow when approaching a vulnerable person:

Approach carefully and slowly, from the side if possible

Try to start a conversation – whatever comes naturally

Ask open questions: these are helpful as they encourage people to talk through their problems

Ask how they feel: Being invited to say how they’re feeling could be a big relief – and you may find out more about what they’re really worried about

Put yourself between the person and the tracks

Go on the tracks under any circumstances

If the individual doesn’t want help, try not to put any pressure on them. Stay nearby and do not leave them on their own