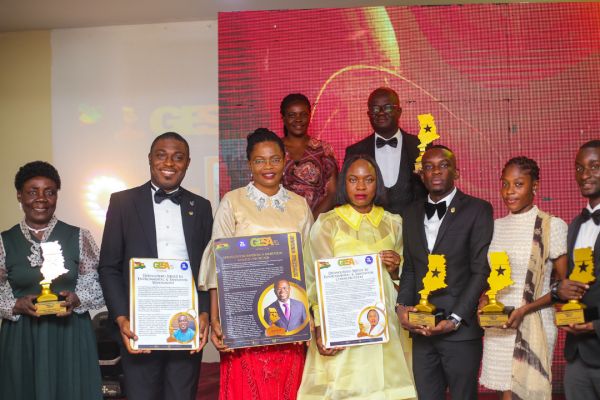 The Jospong Group of Companies (JGC) triumphed as it grabbed Eight (8) prestigious awards at the just-ended maiden edition of the Ghana Environmental & Sanitation Awards, (GESA) 2022.

The Ghana Environmental Sanitation Awards (GESA) is a pace-setting annual awards scheme that seek to encourage Government, Public Sector, Non-Governmental Organizations (NGOs) and all individuals and institutions to create synergies to work towards achieving the set goals in the Environment and Sanitation value chain to attain the sustainable development goals (SDG GOAL 6, 13 and 14).

The event took place at the AH Hotel and Conference within American House in East Legon, Accra.

In his remarks, Mr. Nana Yaw Kwakye-Boadu, Founder and CEO of GESA, thanked his team, headline sponsors, and partners, especially AH HOTEL and congratulated all awardees for their hardworking and passion in environmental and sanitation promotion.

He encouraged awardees to excel and continue to advocate for positive change toward the environment and Waste Management.

He also announced that his organisation and the AH Hotel under the support of Dr Joseph Siaw Agyepong would give a one-month free accommodation to Madam Philomena Dzogbo, a sweeper based in the Madina area who won the maiden Borla Woman of the Year.

This is to appreciate her selfless, hardworking, passionate, enthusiastic and dedicated work in the area of environmental and sanitation promotion.
He alluded

” Madam Philomena Dzogbo known as Borla Police in the Adenta and Madina Municipalities would be given special treatment at AH Hotel for the one-month period which will include free breakfast, launch and dinner of her choice among others.

The Executive Chairman of Jospong Group of Companies Dr Joseph Siaw Agyepong won the Environmental and Sanitation Man of the Decade, Most Impactful Clean Ghana organization went to Zoomlion Ghana Limited, while Sewage System Ghana Limited was adjudged Most Impactful Waste Management Organization of the Year.

The Most Impactful Clean Ghana Campaign Project went to the One Million Bins Project and the Most Borla Woman in Ghana Award went to Madam. Philomena Dzogbo (a. k. a. Borla Police) and Mr Edmond Nana Otu Yeboah, an Assistant Communications Officer at Zoomlion grabbed the Distinguished and Most Competitive Award which was Most Influential Blogger/ Vlogger in Environmental & Sanitation Promotion of the Year.

Receiving the award, Ms Emma A. A. Osei-Duah dedicated the award to the Zoomlion staff, Sewage System Ghana Limited hardworking Staff, and the entire Jospong Group of Companies’ employees for their passion, dedication and hard work which has brought such honours to the group.

She thanked the Executive Chairman, Dr Joseph siaw Agyepong, Management and the entire amazing employees of Jospong Group. “We are grateful for your votes, support and enthusiastic work to project the brand to the world, God bless us all”.

She also expressed her appreciation to the organizers for organizing such prestigious awards.