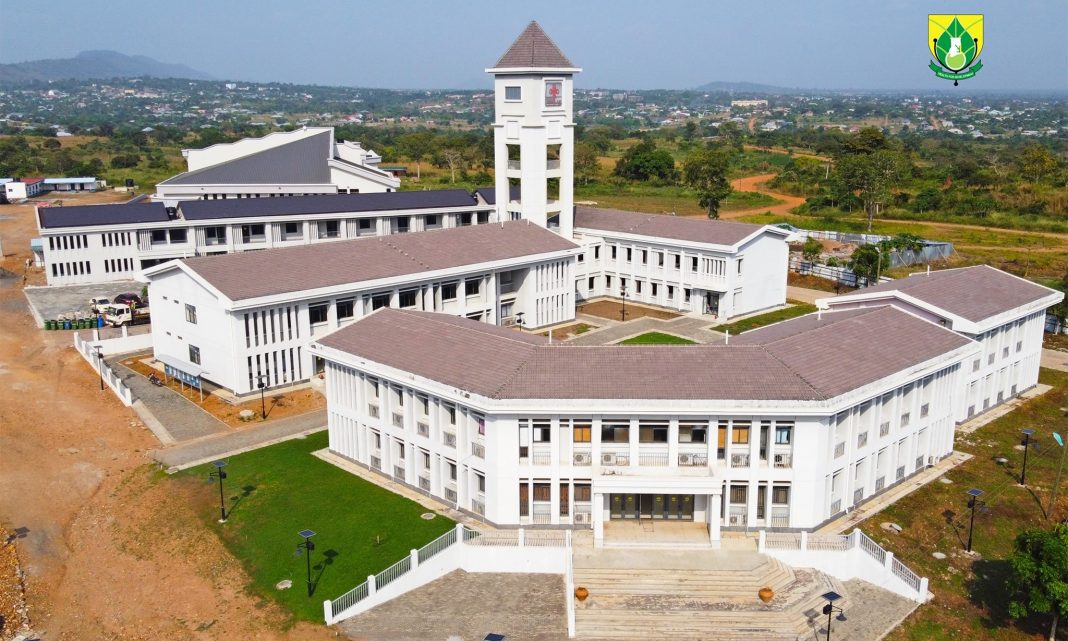 He said the unfading legacy of the late President, who died in office in July 2012, should be cemented to guide the nation’s dreams of development transformation, and that the University he passionately established would be best to honour him in name.

Prof. Binka made the call when he delivered the Keynote at a memorial lecture to mark the 10th anniversary of the demise of the astute head of state, organised by the JEA Mills Memorial Heritage at the Cedi Auditorium of the University.

“The legacy of Professor Mills is so critical and important in today’s Ghana,” he said while eulogising the memory of the late President in layers of praise.

Prof. Binka said Prof Mills “father for all” mantra was critical for the outlook of the nation’s leadership, and that “his will and courage to pursue upright governance should inspire.”

“Leaders must be ready to show leadership when it matters most. Leaders must have the moral courage to address serious challenges that undermines the efficiency of their organizations,” he said.

Prof. Binka noted that the peaceful progression of the University through the years replicated “the way the old man used to behave,” and promised to help leadership of the institution preserve the legacy of Prof. Mills.

He commended the University for setting the pace in immortalising the late leader and called to ensure the legacy survived to inspire coming generations.

Dr Mrs Grace Amey-Obeng, CEO of FC Beauty Group of Companies, and who was also a speaker, said the nation’s ability or inability to celebrate its heroes affected its advancement, and urged all to emulate the all-loving nature of the late President.

Dr Amey-Obeng, who had worked with the late President on several women support initiative, said he deserved to be held up for his efforts to elevate gender, and counted several top women appointments he made while in office.

“Professor Mills was passionate about women and women development, and during his time a lot of women had opportunities,” she said.

Rev. Gabriel Akwasi Mante, Catholic Bishop of the Jasikan Diocese, said the life of the late President should “apprise us to change and adopt the process of attitudinal change we all need.”

He urged us to consider the principles and values of integrity, which Prof. Mills upheld, and said it would help strengthen the foundations of the nation.

The lecture was titled “the Man John Evans Atta Mills, 10 Years On,” and was attended by management and faculty of the University, past and present political leaders, students, and the public.

Prof. Lydia Aziato, Vice Chancellor of the University, which was few months into its establishment, when the President passed on, said all must support the full realisation of the vision.

She therefore commended successive governments for helping make the University an object of repute and jealousy and appealed to provide the needed infrastructure including internal roads and accommodation.

“The University’s values of service and care is most congruent with the values of President Mills, and we will make sure we stick to them,” she assured.

Alex Segbefia, Chairman of the memorial heritage, said it was established as a “nonprofit, nonpartisan, independent organisation” aimed at preserving and promoting the ideologies of Prof. Mills.

“We work and incorporate the values and principles that President ills lived for,” he said.

The event had poetry recitals, and cultural displays to spice.

A video documentary showcasing his legacy was screened, and a book named “Atta Mills Speaks,” which contained his speeches including State of the Nation Addresses he delivered, was launched, and auctioned at the event.

The Accra Zoo is safe, let’s patronise it — Abu Jinapor