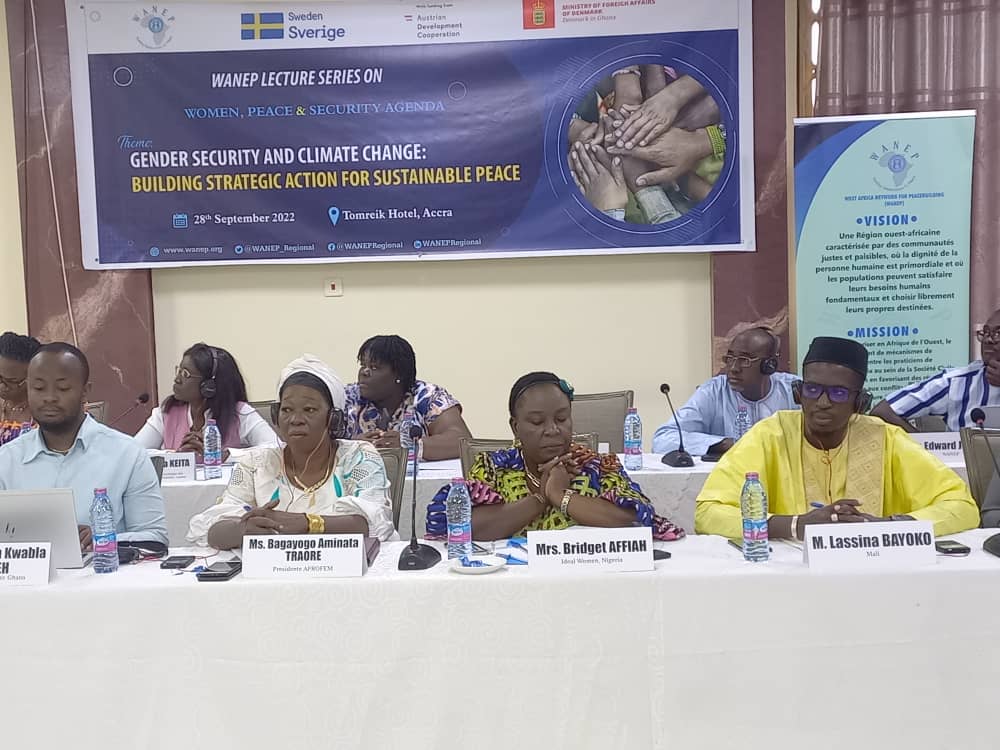 Accra, Sept. 29, GNA — The West Africa Network for Peacebuilding’s (WANEP) has held its second Lecture Series on Women, Peace and Security Agenda with a call for women to be included in tackling issues of climate change.

It was on the theme: ‘‘Gender, Security and Climate Change: Building Strategic Action for Sustainable Peace.’’

The Lecture series was instituted in 2021 as a platform to help bring visibility to the needs and efforts that are being taken by women and to identify gaps to achieve the aspirations that have been set out in various global frameworks, including the SDGs and AU’s Agenda 2063.

The second Series was for stakeholders to share experiences and good practices in implementation of climate change actions and brought together experts on issues, including gender, security and climate change  from West African countries to establish the links between climate change, women and security.

Mrs Mrs Levinia Addae-Mensah, Deputy Executive Director, WANEP, said there was an urgent need to address specific needs of women in response to climate change because gaps had been identified in that regard.

She said when people meet their basic needs, it reduced their tendency to be involved in violent acts.

She said the experiences shared at the Lecture Series would encourage others to find innovative ways to address climate change.

Dr Angela Lusigi, Resident Representative, United Nations Development Programme, (UNDP) said climate change was one of the greatest threats to global peace and security, noting that the impacts were more pronounced in Africa.

She said its effects were reversing gains the world had made towards achieving the Sustainable Development Goals (SDGs) as demonstrated by UNDP’s latest global human development report.

‘‘As you know, a key coping strategy for households when food is in short supply is for women to give the available food to their children and go hungry,’’ she stated.

He noted that its impact had already increased the insecurity of vulnerable communities in many regions of the world, worsening loss of livelihoods, food insecurity, competition over scare resources, human mobility, and political and economic instability.

She underscored the need to design policies and programmes that meaningfully engaged women in assessing and addressing the gender-differentiated risks and opportunities of climate change impacts in fragile contexts to better address the root causes of conflict and promoting more inclusive, peaceful societies.

Mr George Amoh, Executive Secretary, National Peace Council, said women were denied their livelihoods due to the activities of illegal miners, noting that over 70 per cent of women farmers were the most affected by climate change.

He called for right measures to be put in place to tackle climate change issues to build resilience and mitigate conflicts in Ghana and the Sahel regions.