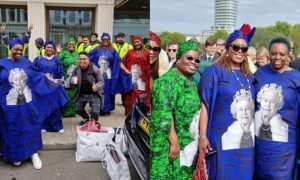 Nigerians who attended the burial of late England’s monarch, Queen Elizabeth II, in the United Kingdom have been honoured by the Palace.

Nigerians abroad went above and beyond to honour the late Queen. Photos that went viral online showed Nigerians dressed in vibrant “Aso Ebi” with the late Queen’s picture printed on it.

It was their original way of honoring the longest reigning monarch of England.

An update to the story stated that the UK Palace had asked for the costume to be on exhibit at the London Museum.

This report was shared online by famous news publisher, Dele Momodu, who disclosed that the ‘Aso Ebi’ outfit started as a joke but was taken seriously by one of the group members.

Dele Momodu also described the outfit’s delivery from Lagos to London the day before the momentous occasion and the way a global media outlet made the outfit’s originality known.

He wrote on Instagram: “It started as a joke, and one of us took it seriously. The outfits were turned around in four days and delivered from Lagos to London the day before the event.

“It went viral on Sky News, and the Palace has now requested for it to be displayed at London Museum,” he said.

“I Was Unhappy On My Wedding Anniversary” – Stan Nze

“Most Men Want Me Because Of My Dad” – DJ Cuppy Laments