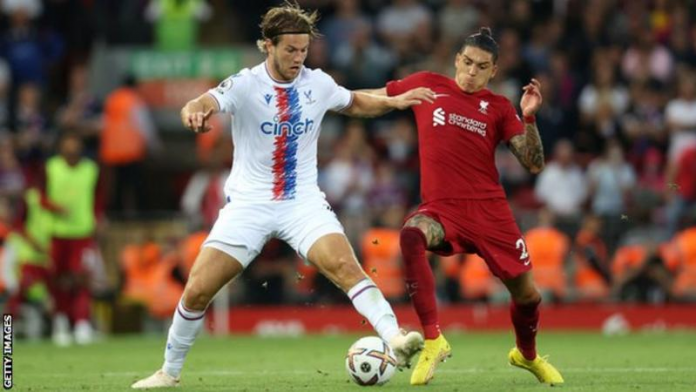 Joachim Andersen has received more than 400 abusive messages on Instagram – including sickening death treats – after Darwin Nunez was sent off on Monday night.

Liverpool striker Nunez, 23, was shown his marching orders by referee Paul Tierney after lashing out at the Crystal Palace defender during the side’s 1-1 draw at Anfield. The Uruguayan was making his home debut for the Reds after his £85million move from Portuguese side Benfica in June.

At the time, Palace were leading on Merseyside thanks to Wilfried Zaha’s first-half goal. A stunning strike from Luis Diaz managed to salvage a 1-1 draw for Liverpool, leaving them four points behind champions Manchester City in the Premier League title race.

On Tuesday, Denmark international Andersen called on the Premier League and Instagram to take action, as he revealed some of the dire messages he had been sent in the aftermath of the fixture.

“Got maybe 3-400 of these messages last night,” revealed Andersen on Tuesday. “I understand you support a team but have some respect and stop act tough online [sic].”

Andersen then provided some screenshots of the messages (warning, they contain strong language and death threats). “F*** you,” read one message. “I will kill you. You and your family. F*** you tomorrow. See you. You will died [sic].”

Another read: “So you shout, shove and point at someone, but fall down like a little pathetic b**** when they turn round and stand up to you? What a small little child you are. Pathetic little b**** boy. Fell down like a b****, don’t act big only to fall down like the little rat you are.”

Andersen published more abusive messages in other languages on his Instagram story. He added: “Hope Instagram and the Premier League do something about this.”

It’s believed the Premier League are aware of Andersen’s complaint and will contact Palace to offer their support.

Virgil van Dijk insists Nunez has the full backing of the Reds’ squad despite his red-mist moment – but has warned it must never happen again.

“Obviously he was disappointed and also probably with himself but it’s a learning curve and obviously we will always back him,” Van Dijk said.

“He’s got the backing from us and he knows it should not happen again and hopefully it will be that way.

“He has to control himself, definitely. I think that’s a separate thing. He has to manage himself, he has to be knowing that these things can happen, especially in the Premier League. It will be a learning curve for him and hopefully it will never happen again.”