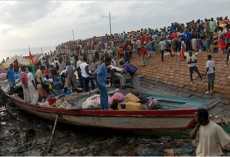 Artisanal and inshore fishing activities along the coast which took a month-long break are expected to resume on August 1.

The closed season, enforced by the Ministry of Fisheries and Aquaculture Development (MoFAD), in collaboration with the Fisheries Commission on June 1, this year was to replenish the fish stock.

At the Ussher Fort Beach in Accra, most of the fishermen were seen working on their canoes while others were mending their nets to resume work next Monday.

A fisherman, Samuel Quartey, told the Daily Graphic that he thanked God that the closed season would end soon. He said they went through some financial difficulties and said the items given to them by MoFAD were not enough to feed their families.

The intervention is to avoid over-exploitation of the fish resource and to ensure acceptable fishing practices.

The ultimate aim of the closed season is to improve the livelihoods of smallholder fishers, other users of the marine resource and the interest of people in communities that depend on fishing.

The closed season concept was introduced by the government in 2016 to help replenish the fish stock following the slapping of a yellow card on Ghana for unsustainable fishing practices.

With research establishing that one pregnant fish had the potential to drop over 25,000 eggs, the players in the sector believe it was better to allow the pregnant fish to breed (spawn) rather than fishers going to sea and returning with no catch.

Ghana Has No Active Cases Of Marburg Virus; See When Outbreak Will Be Declared Over | Health