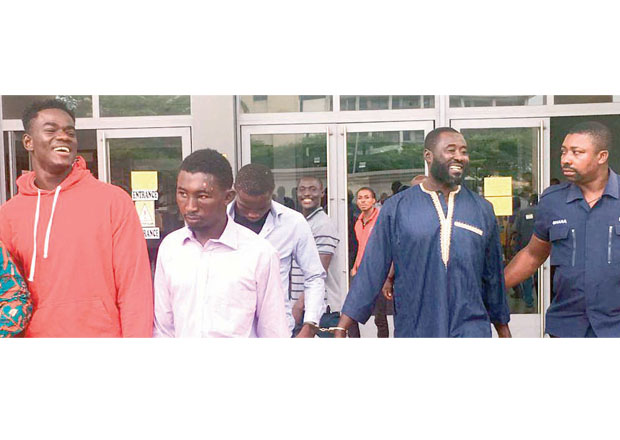 Judgment Day For Kumasi Kidnappers
BY Gibril Abdul Razak
An Accra High Court has set November 24, 2022, to deliver its judgment on the trial of four persons put before it for allegedly kidnapping two Canadian ladies in Kumasi in 2019.
Justice Lydia Osei Marfo, the trial judge, on July 1, 2022, ordered the prosecution and the defence lawyers to file their written addresses by July 28, 2022, to enable it set a date for the judgment.
However, both counsels failed to meet the deadline set by the court although Sefakor Batse, a Principal State Attorney who held brief for Winnifred Sarpong, told the court that the prosecution had filed its 77-page written address and went ahead to show a copy to the court.
The court subsequently set November 24, 2022, to deliver its judgment in the case in which the four have been arraigned for kidnapping the two young ladies and later demanded $800,000 from their parents as ransom. The accused, if found guilty by the court, could face up to 10 years’ imprisonment in hard labour.
Sampson Aghalor, 27, computer engineer; Elvis Ojiyorwe, 27, businessman and Jeff Omarsa, 28, Tiller – all Nigerians and their Ghanaian counterpart Yussif Yakubu, 28, are before the court charged with conspiracy and kidnapping contrary to the Criminal and Other Offences Act.
An all-Ghanaian security operation led by the National Security in June 2019, rescued the two Canadian ladies who were abducted from the gates of their hostel in a Kumasi suburb two weeks earlier.
The kidnapping of the two ladies sparked public outrage in early June last year, and a National Security operation led to the dramatic release of the two ladies and subsequent arrests of eight suspects on June 11, 2019.
Eight persons were initially arrested but four of them were discharged as the prosecution decided to drop all charges against them after reviewing the investigations.
The accused persons are alleged to have demanded a ransom of $800,000 from the relatives of the victims, and threatened to kill them if the money was not sent to them. They were said to have also touched the ladies inappropriately and threatened to have sex with them.
In a bid to get the parents to pay the ransom, the accused persons smeared the victims with the blood of a fowl, took pictures of them and forwarded them to their parents.

Be wary of breast cancer