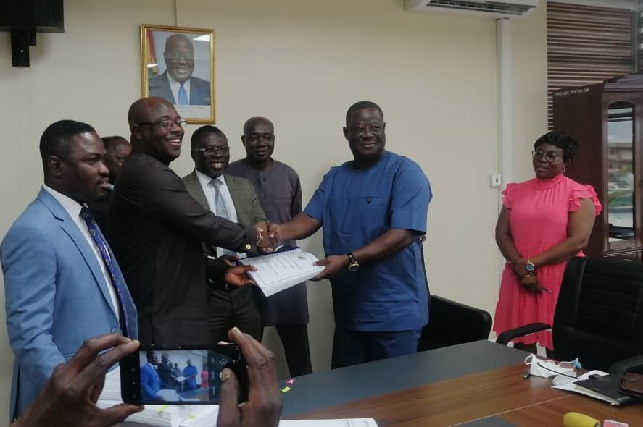 The Minister of Roads and Highways, Kwasi Amoako-Atta, signed the agreement on behalf of the government with First Sky Limited, a subsidiary of the First Sky Group, to undertake the project, which spans two regions, namely the Greater Accra and Eastern regions.

Executive Chairman of the First Sky Group, Eric Seddy Kutortse, as well as Ing. Oliver Acquah, signed the contract on behalf of the company.

According to the minister, the starting point, Dome Roundabout, is in the Greater Accra Region, whereas the termination point, Kitase, is in the Eastern Region.

He disclosed that the Kuwait Fund for Arab Economic Development (KFAED) and the Government of Ghana are the funding sources for the road project that is expected to be completed in 24 months.

Mr. Amoako-Atta said KFAED had provided a loan amount of 7 million Kuwaiti Dinar (approximately US$24 million) with a counter-funding of GH¢66,136,400 (US$11 million) from the government.

Under the agreement, he stated that the First Sky Limited, which won the contract under a competitive bidding, would receive a total of GH¢192,932,197.96 to undertake the rehabilitation of the road.

The minister said the current state of the road, if improved, would result in the preservation of the road assets with favourable impact on the socio-economic activities of the people living in the area of influence.

Mr. Amoako-Atta noted that vehicle operating cost will significantly reduce as well as the frequent breakdown of vehicles plying the road, which has become a disincentive for those engaging in business activities.

In addition, fixing of the road will also provide an alternative route from Accra to Peduase in the Eastern Region, intimating that an improvement of the road will enhance economic activities, movement of mainly agricultural produce and people to markets, and facilitate trade and economic integration of the two regions.

He added that a sod-cutting ceremony would soon be performed as the contractor prepares to mobilise to site.