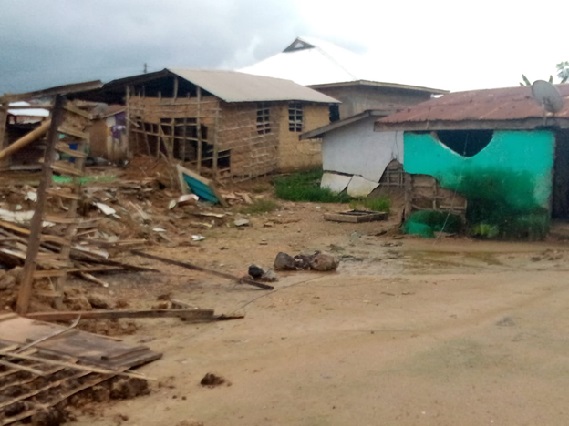 Some houses that were affected by the floods

GOVERNMENT HAS agreed to help resettle residents of Ellembelle in the Western Region whose houses collapsed during a recent heavy downpour.

District Chief Executive for Ellembelle, Kwasi Bonzoh, who made this known, underscored the need for the people in the area to support the government to improve their living standards.

He assured them of the current government’s resolve to go the extra mile to build a society that works for everybody.

Over 150 houses collapsed and more than 300 residents were displaced at Nzema Akropong in the district after the heavy downpour.

Mr. Bonzoh said the Akufo-Addo-led administration has kept faith with the people of Ellembelle with the provision of some development projects including road construction.

He, has therefore, asked all the residents to continue to support the government’s developmental agenda in the area.

The DCE stated this when Memphis Metropolitan Limited, a construction company currently working on the Esiama to Asasetre road in the area, presented assorted items worth over GH¢25,000 to the affected persons.

The items included 500 bags of cement, 100 packets of roofing sheets, 150 bags of rice, 200 bottles of soft drinks, 50 boxes of spaghetti, 200 bags of sachet water and 50 boxes of frytol cooking oil among others.

“Remember I told you when the incident happened that more help will come your way.

“This is the third time such disaster has happened and I promised you, you’ll not experience it again. This is because government resolved to resettle the whole community at a safer place.”

Announcing his decision to contest as a parliamentary candidate on the ticket of ruling NPP in the next parliamentary elections, he said

“I believe that this time round you will give me the opportunity to represent you in Parliament for the area to experience massive development.”

Cephas Kafui, Operations Manager of the construction company, pointed out that the presentation was part of the company’s corporate social responsibilities.

He appealed to the residents to cooperate with the workers to ensure the smooth execution of the road project.

For his part, the Western Regional Minister, Kwabena Okyere Darko-Mensah pointed out that it was only the NPP that had the welfare of the people of Ellembelle at heart.

He said government was ready to compensate farmers whose farms would be destroyed to make way for the resettlement project.