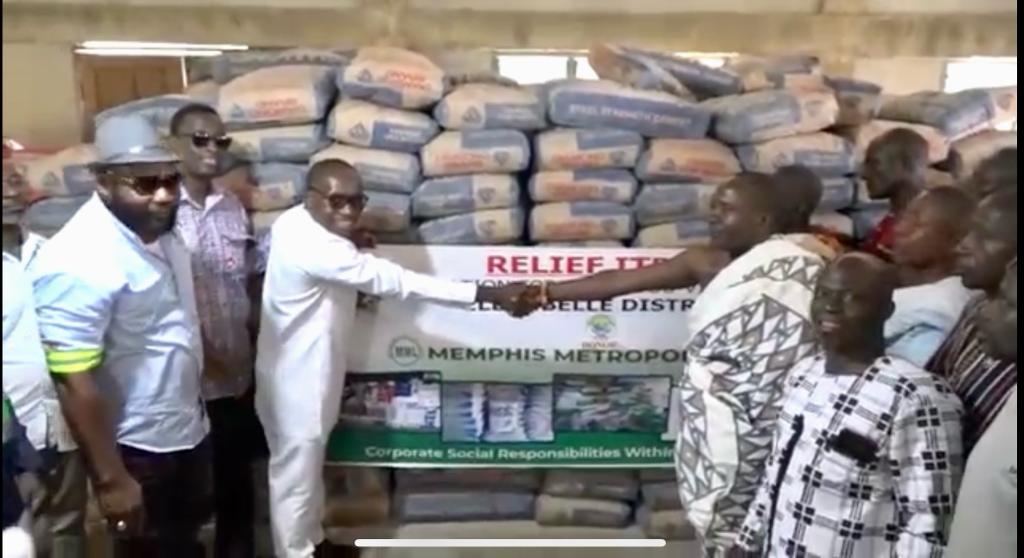 The about 300 residents of Nzema Akropong in the Ellembelle District of the Western Region who lost their homes and other properties to last week’s floods have received assorted relief items and construction materials worth GH¢250,000 from Memphis Metropolitan Construction firm, which operates in the area.

Speaking on behalf of the Managing Director of Memphis Metropolitan, Patrick Kwame Danso, during the presentation of the food and construction items, the Project Manager of Memphis, Cephas
Kafui Apenuvor, told Citi News that their support, which comes after a request by the District Assembly, is part of their Corporate Social support to the people of Nzema.

“We have been operating in the enclave since 2014, and so we are giving this donation to the affected community as our corporate social responsibility. We brought 100 packets of roofing sheets, 500 bags of cement, 150 bags of rice, 50 boxes of spaghetti, 50 boxes of tin fish, 50 boxes of tin tomatoes, 200 packs of soft drinks and 200 bags of sachet water which in all cost GH¢250,000. It is because of the love my Managing Director, Patrick Kwame Danso has for the community that he decided to spend such amount to support the affected victims”, he said.

The District Chief Executive of Ellembelle, also speaking at the donation, told Citi News over 300 people have been rendered homeless by the floods and plans to relocate the affected victims to a new site.

“Currently we have 123 households that have been destroyed. So that is the household we are immediately going to relocate to the new site. Already the plans and the layout of the demarcated area are being done and tomorrow the technical team that is working on it will visit the town and measure the exact dimensions of the destroyed properties so that we can move the exact dimensions to the new location. We are also going to make sure that we provide street layout, water and electricity. We are also in touch with the Ghana Red Cross Society, which is ready to provide some temporary shelter kits for those who are currently homeless to have a place to lay their heads at night. Currently, over three hundred people are homeless in this community, so we brought blankets, mats and mosquito net from UNHCR to support them while we are reconstructing and doing the resettlement,” he explained.

Kwasi Bonzoh who was appreciative of Memphis Metropolitan’s donation also expressed the hope for other companies within the Ellembelle area to come to their aid.

“We are grateful to Memphis Metropolitan. So when this disaster happened I reached out to several companies, Adamus responded immediately and then Memphis also responded. UNHCR has also responded, but it is left with other companies. Ellembele hosts oil and gas companies including Ghana Gas, Eni, Quantum including the International Oil Companies. We have reached out to all of them and in the coming weeks, we will follow up and let them appreciate the need to help the people of Akropong to resettle and relocate to higher grounds to avert future floods”, he noted.

The Western Regional Minister, Kwabena Okyere Darko Mensah, reemphasized the need for persons living in flood-prone areas to take their safety into their hands.

“We cannot continue to live in a flood zone area and always be suffering. Akropong people have taken a firm decision to relocate themselves to higher grounds and therefore government is ever ready to support them to be able to do that relocation. Like I said already, all the crop compensation will be taken care of because as for the lands are concerned, the chiefs have given it to us. We are also bringing a borehole to the place immediately they start setting up so they can work. Thirdly, what we are looking up is that all those that we are going to build are new and government is going to support them with cement and roofing sheets so that quickly as possible we want them to get out from the flood zone area which has caused them havoc for more than three times, and we don’t want it to continue because we don’t know when someone will die out of it. So we are very grateful that at least the plan B is working in Akropong“, he said.