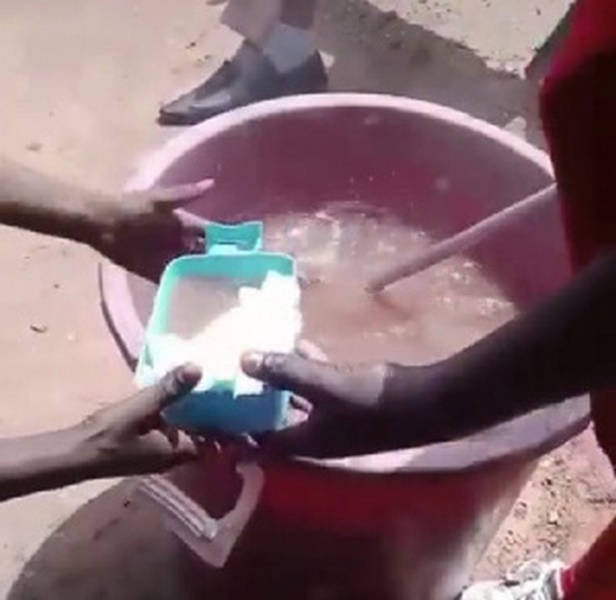 Managers of the Ghana School Feeding Programme (GSFP) say they have started serious background checks to establish the source of a viral video in which a number of school children are served what appears to be innutritious dish.

The GSFP says it has also directed all its 16 Regional Coordinators to do their independent checks on the matter.

The video has been making the rounds on various social media platforms this week, and although the setting appears not to be Ghanaian, the GSFP says it nonetheless intends to clear all doubts about its source and why the discouraging scene that plays out of the video may not be related to the school feeding programme in Ghana.

A statement issued by the GSFP, signed by its Head of Public Relations, Siiba Alfa said its attention has duly been drawn to the viral video.

“In the said video, a faceless woman perceived to be a caterer is seen dishing out what appears to be a hot liquid substance believed to be hot soup to some school children who were served with a particular meal in their bowls suspected to be “ebba” (mixture of gari and hot water) a common delicacy in Nigeria and other parts of Africa.

“Our preliminary analysis of the video specifically on the pupils and their uniform could not establish their true origin.

“Unfortunately, the face of the suspected Caterer was also not captured in the video except her feet. A man suspected to be a teacher or headteacher of the school was also captured with only his legs crossed, but without his face.

“This, therefore, makes it difficult for Management to conclude, agree or accept that the suspected caterer in the viral video is one of our trained and experienced caterers.

“Management of Ghana School Feeding Programme is almost convinced that the viral video is not from any of our beneficiary Ghanaian schools especially considering the container used by the suspected Caterer to dish out the supposed soup.

“Ghana School Feeding caterers anywhere in Ghana have received the requisite basic nutrition and innovation training; and are under strict instructions to serve foods in ice chests in order to keep the food warm at all times.

“We also believe that if this incident had occurred in Ghana, the head teachers and SHEP Coordinators in the schools who are effectively collaborating with the Ghana School Feeding Programme to inspect and taste every single meal prepared by our caterers on daily basis , would have officially reported that incident to our regional or national secretariat by now.

“That notwithstanding, Management has commenced serious background checks to establish the actual source or root of that viral video. We have also directed all 16 Regional Coordinators of the Ghana School Feeding Programme to do their independent checks on the matter.

“Management would also like to appeal to the general public or any individual who has any information or evidence that could lead to the actual school or the caterer not to hesitate to assist the Secretariat.

“We urge our stakeholders to remain calm, and rest assured that every effort is being made to get to the bottom of the issue for a speedy redress.”

Fellow Ghanaians, this is Uganda. I will not insult our School Feeding programme again. Or you say I’m comparing with Mediocrity?
A Ugandan friend said the food is called posho and beans (Google the images). But see what they’re serving.

“What did black man come to do on earth?” pic.twitter.com/Pjzh0DoRb6