Going to IMF does not guarantee your win in 2024 elections, the NDC told 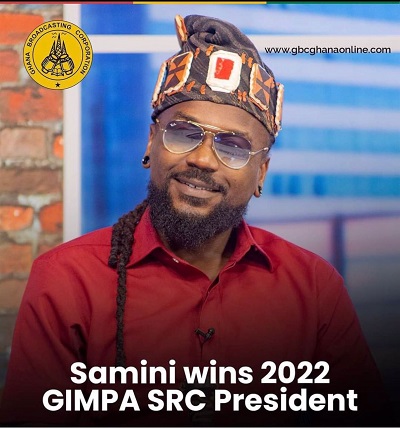 Reggae-dancehall act, Samini has been elected president of the Students Representative Council of the Ghana Institute of Management and Public Administration, GIMPA.

He won with 307 votes while his opponent Theophilus Quartey, a level 300 student of Finance polled 212 votes.

Samini is the official GIMPA SRC president-elect with his Vice-president being Mabel Mensah.

He has since joined GIMPA students who are celebrating his win.

“Thanks to all who believed and encouraged me to go for the topmost…to my doubters I say bigger thank you for making me see the need to prove you wrong. #Akyesaaaaa the work begins here,” he wrote on Instagram on Thursday. Several showbiz personalities have also been congratulating him.

Samini is currently reading Business Administration. He first announced his return to school this year after videos of him in class popped up online.

He took the advantage to encourage anyone who wishes to return to school to do so because it is never too late.

“This post is to inspire whoever wants to go back to school that it’s NEVER too late to start from wherever you left off,” he wrote.

The ‘Obaa’ singer is in the Business School where he is studying Business Administration.

The musician who actively campaigned for the NPP in the 2020 elections later announced that he would be contesting in the GIMPA SRC elections as the President and indeed he has won.

Going to IMF does not guarantee your win in 2024 elections, the NDC told

IMF bailout: Ghana will be ungovernable if… – Prof Gyampo