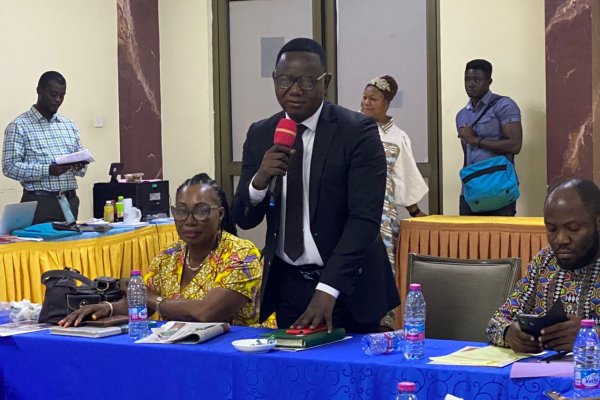 Accra, June 23, GNA – Mr Edward Kareweh, the General Secretary of the General Agricultural Workers Union (GAWU), has called on stakeholders to come together to help eradicate child labour, forced labour and human trafficking to the barest minimum.
He said, “…so we have been working in making sure that modern slavery which encompasses a number of areas like child labour, forced labour and human trafficking are eliminated to the barest minimum in the country.”
Mr Kareweh said there was the decision to have a partnership with Action Aid Ghana on a project called “Modern Slavery” to help carry out this task.
The General Secretary was speaking at a National Dialogue event on the theme: “Strengthening efforts in the fight against child labour (including worst forms of child labour), forced labour and human trafficking in Ghana: our collective responsibility.”
The dialogue is to identify, prevent and address incidences of child labour, forced labour, and human trafficking within the agricultural value chain and to discuss new strategies for combating its occurrences and the role of stakeholders.
He said the project was funded by the Norwegian Agency for Development Corporation to facilitate the implementation of ways to identify, prevent and address modern slavery within the agricultural sector in Ghana.
Mr Kareweh said, the “modern slavery” project seeks to eliminate the involvement of child labour and women in agriculture plantations under the conditions of servitude.
“To enhance the knowledge of individuals and communities on modern slavery practices so they can act in concert to prevent such practices,” he added.
Mr Kareweh said, “what we are doing is to bring together all the state institution agencies like the Labour Department, Feeder, the police anti-trafficking unit and other institutions to help identify the incidence of child labour, forced labour and human trafficking within our society in the agricultural sector.”
“…and then together, we will collectively develop strategies to be able to combat these issues,” he added.
DSP William Ayaregah, a Representative from Anti-Trafficking Unit, the Ghana Police Service, said the issue of human trafficking was dear to the Ghana Police Service because people fell prey to unsuspecting persons, who normally traffic them, and send them to other countries, for purposes of labour and sexual exploitations and organ harvesting.
He cautions the citizenry that “not all that glitters is gold,” so the citizenry should be careful of jobs promised to them.
DSP Ayaregah said the citizenry should draw the attention of the Labour Department or the CID headquarters to investigate the background of the employers as some of them traffick young ladies
to Ghana and exploiting them sexually.
“They bring them by deception to give them jobs in boutiques, or any other places, but when they arrive, they seize their passports and force them into prostitution, and take the money earned from the ladies after the process,” he added.
He said they have arrested a lot of them, and many of them were under prosecution.
DSP Ayaregah said they have also rescued most of the victims, and through the support of the International Organization for Migration and they were able to reintegrate most of the victims with their families back in Nigeria.
Madam lngrid Mollestad, the Norwegian Ambassador, said the current global economic and food security threats were real and a growing population would be at risk of social vulnerabilities.
“This calls for national and international solutions with firm sustained commitments from all stakeholders,” he added.
The Ambassador said Norway recognised the range of interventions being made by Ghana to address and possibly reduce the spate of this menace.
She said, “We especially appreciate the multi-sectoral approach towards eradicating all worst forms of child labour, and that we entreat the various stakeholders to remain focused and committed in their respective contributions towards this crusade.”
“Norway is prioiritising the fight against forced labour, human trafficking, and other forms of exploitation, through a coordinated partnership with different actors in-country, including civil societies,” he added.
“We encourage and assure Ghana of Norway’s continued support and partnership in this regard,” he added.