Video: ‘Some Hearts of Oak players mix alcohol with we.ed and sm0ke heavily before games’ 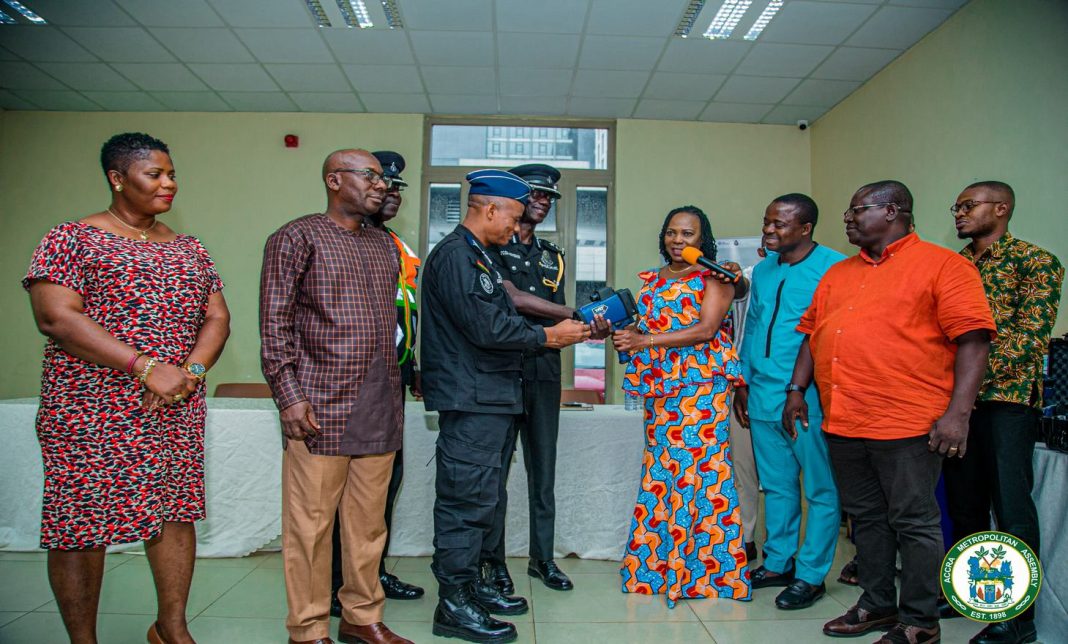 The TruCAM II is the ultimate traffic and speed enforcement laser device with a video that provides a high-resolution image and shows the license plate number, as well as a full-length video of the violation.

The device, which is more than just a speed enforcement device, could also help identify other traffic violations such as following too closely,  aggressive driving, misuse of designated lanes, distracted driving, obstructing traffic, and seatbelt violations among others.

Speaking at a brief ceremony at the Accra City Hall to formally present the items to the Police, Metropolitan Chief Executive of Accra, Elizabeth Kwatsoe Tawiah Sackey said the donations would go a long way to ensure professionalism in enforcing speed rules in Accra, especially following the recent surge in road crashes.

“Today, AMA together with its international partners, the Bloomberg Initiative for Global Road Safety (BIGRS) is here to demonstrate our resolve to help curb this needless loss of lives on our roads. In this season when road crashes abound, it is paramount to assist the police MTTD with devices so that they can properly and professionally enforce speed in Accra, ” she said.

Mayor Sackey also added that findings from the AMA  Road Safety Report indicated that reported road traffic deaths increased from 103 in 2019 to 136 in 2020 recording a 32% increase hence the need to vigorously enforce the rules on speeding to curb the issue.

“Road crash and injury statistics tell an upsetting story about the state of road crashes in the city of Accra. Findings from the Accra Metropolitan Assembly’s road safety report indicate that reported road traffic deaths increased from 103 in 2019 to 136 in 2020 recording a 32% increase.

“This lends credence to the global prediction of an increase in road traffic crashes and deaths over the next 10 years if governments do not put in place urgent concerted action to stop the carnage, ” she noted.

She called on the police to enforce the road traffic regulations without any fear or favour.

The Mayor also acknowledged the contributions of stakeholders in the quest to educate and enforce laws to make the roads safe for all and called on the Driver and Vehicle Licensing Authority (DVLA) not to issue roadworthy certificates to vehicles that were not roadworthy to safeguard the safety of drivers, passengers, and other road users.

The Director-General of the Motor Traffic and Transport Department (MTTD) of the Ghana Police Service, Deputy Commissioner of Police(DCOP) Mr Ofosu Agyemang who received the devices in a speech on behalf of the Inspector General of Police (IGP), Dr George Akuffo Dampare, expressed his appreciation to the AMA-BIGRS and its partners for their efforts in ensuring safety on our roads.

He also disclosed that the AMA in collaboration with BIGRS has been working hand in hand with the police MTTD to reduce the number of road crashes in the city of Accra since 2018.

“Ladies and gentlemen, it’s also a fact and worth mentioning, that the Accra Metropolitan Assembly and the Bloomberg Philanthropies Initiative for Global Road Safety has also been working closely with the police MTTD to lessen the number of roads fatalities in the city of Accra since 2018; the collaboration has also provided continuous enforcement capacity building and programs and the formation of cross speed safety device in the MTTD and we applaud the AMA as well as BIGRS for their concerted efforts towards this issue of road crashes, ” he said.

DCOP Mr Ofosu Agyemang assured that the devices would be put to good use and warned motorists to drive within the posted speed limits and observe all road signs in the city.

Director-General of the National Road Safety Authority (NRSA), Ing. David Adonteng stressed the need for drivers to adhere to the posted speed limit signs to reduce the rate of speeding.

Video: ‘Some Hearts of Oak players mix alcohol with we.ed and sm0ke heavily before games’