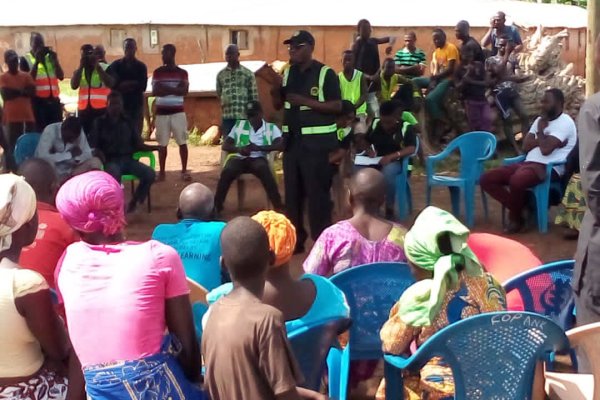 Ankanse-Matamallam (O/R) May 28, GNA-Mr David Osafo Adonteng Acting, Director-General of the National Road Safety Authority (NRSA) and his entourage have commiserated with the families of the six schoolchildren, who suffered know-downs recently at Matamallam in the Krachi Nchumuru District of the Oti Region resulting in their deaths.
The delegation commiserated with the bereaved and the survivors’ families in the community.
He urged drivers of public transport to exercise caution with the lives of passengers in their vehicles and pedestrians on the ground.
Mr Adonteng cautioned that the quality or goodness of road networks is not a panacea to Overspeed as associated accidents and maiming of passengers and pedestrians have skyrocketed beyond reason in the country.
He said NRSA was engaging the attention of the Ghana Highway Authority to establish speed calming devices on the road networks especially segments that run through major towns to scale-down knockdowns.
He said NRSA was collaborating with the Police and insurance companies to work out compensation for the deceased and survivors according to the law as a sign of fighting for justice for them.
Mr Adonteng entreated parents whose children in the communities have been traumatised due to the accident to provide counsel for them to return to school while efforts were being taken to create awareness on children crossing joints to stem future accidents.
Mr Philip Donkor, Assemblyman of Ankanse-Matamallam, opinion leaders and chiefs have renewed their appeal to the Ghana Highways Authority and government to fast track the construction of speed ramps to curb pedestrian knockdown.
He, however, called on Madam Helen Adwoa Ntoso, Member of Parliament for Krachi West Constituency, the Municipal Assembly, Motor Traffic and Transport Department (MTTD) of the Ghana Police Service and Traditional Authorities to support their appeal to save the lives of the people in the area.
The National Road Safety Authority presented an undisclosed amount of monies to the bereaved families.
Mr Adonteng was accompanied by dignitaries including Reverend Cyril Crabbe from the Accident Victim Support Ghana, Madam Pearl Adusu Gyasi (Head of Corporate Affairs), Madam Joana Fafa Ayer (Oti Regional Head, NRSA), Mr Wisdom Kuebutornye, Mr Mohammed Umar and Mrs Jacklinda Atabrah representing the Krachi West Director of Education.