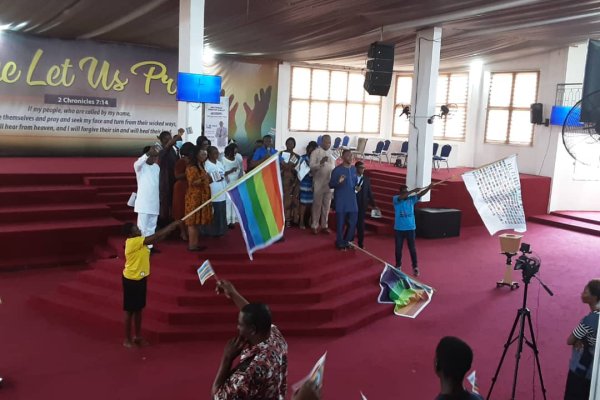 Accra, May 28, GNA – The National Coalition for Proper Human Sexual Rights and Family Values and Advocates of Christ Ghana have launched the “Rainbow Campaign” to reclaim and reaffirm “Rainbow Colours” from the LGBTQI+ community to promote proper sexual values.
Accra, May 28, GNA – The National Coalition for Proper Human Sexual Rights and Family Values and Advocates of Christ Ghana have launched the “Rainbow Campaign” to reclaim and reaffirm “Rainbow Colours” from the LGBTQI community to promote proper sexual values.
The step, as part of the groups’ outlined activities for their “Family Values Month & More” programme, aimed at using the rainbow colours, to re-instill proper sexual orientation in people to restore families values.
The basis of reaffirming and reclaiming the rainbow was from the Holy Bible verse Genesis 9: 13 to 16, where God destroyed humanity with flood after sinning, and set his rainbow in the clouds to be a sign of covenant between him and humanity to remind him not to let flood destroy all lives again.
Apostle Professor Opoku Onyinah, the former Chairman, Church of Pentecost, giving the welcome devotion at the launch in Accra, said a society could only become stable when families had values.
He said Noah in the Bible lived among sinners, but led an exemplary life, hence called on Christians and all who frowned on the acts of the LGBTQI community to propagate the right values of family and openly criticise what was wrong.
“In our generation, it’s unfortunate humanity has sunk into sin more with men sleeping with themselves and women with themselves and with animals and sometimes taking videos of them, and having these things legalised. Let’s not get ourselves to that point where we rebel against God.
“The way and manner the world is going, if God doesn’t get people to stand up, we are bringing diverse diseases among ourselves with our misconducts,” he added.
Mr Moses Foh Amoaning, a Legal Practitioner and Executive Secretary of the Coalition, said it was unfortunate and interesting how the community had taken off the “blue” colour which is of God from the rainbow colours and maintained the rest (six) as their colours.
Just as the LGBTQI community did not give up, he said, it was so that believers had to stand their grounds and reaffirm their rainbow covenant, while speaking to the truth, praying for revival and positive change to reverse the current global situation.
“This is a fight between the Almighty and man. Anybody who wears those rainbow colours for the LGBTQI , you will be a target of the holy spirit, you will speak in tongues, the power of God will come after you. We will restore our rainbow colours to walk in victory, and recover anything you took from the Lord Jesus Christ. The battle is the Lord’s,” Mr Amoaning added.
Mr Edem Senanu, President, Advocates for Christ, called on families to join the fight to teach their children about the importance of valuing the relationship with God and not rebelling against him in deeds.
He said the rainbow of God helped to instill values of honesty, integrity, respect in humanity to provide stronger and healthy relationships for stronger nations.
The Reverend Dr Lawrence Tetteh, the Founder, Worldwide Miracle Outreach, charged those who failed to publicly criticize LGBTQI , especially pastors to desist from the behaviour.
“Those of you scared to die through speaking against LGBTQI , you will die anyway, I’ve seen people die through plain crash, cars, churches, rooms, while eating and everywhere, so it is better you speak to the truth and let God be happy with you.
“The pastors who are scared to speak against LGBTQI in public, churches and on media, let us not suspect you. We are watching you. This is not a hate message but holistic one to restore family values,” he said.
Dr Tetteh encouraged members of the LGBTQI community with interest in quitting the act to show true signs of change to be supported.
Mrs Beatice Oforiwaa Dankyi, a member of the Coalition, presenting the activities for the campaign, said in June, they would “flood” social media platforms with scriptures, animation and words of God against LGBTQI , embark on family health walk and talk and health screening.
In July, she said, the movement would witness it as a month of testimonies with touch of anointing, prayer chain vigil, prayer visit to churches, church rallies, and other church family oriented programmes.