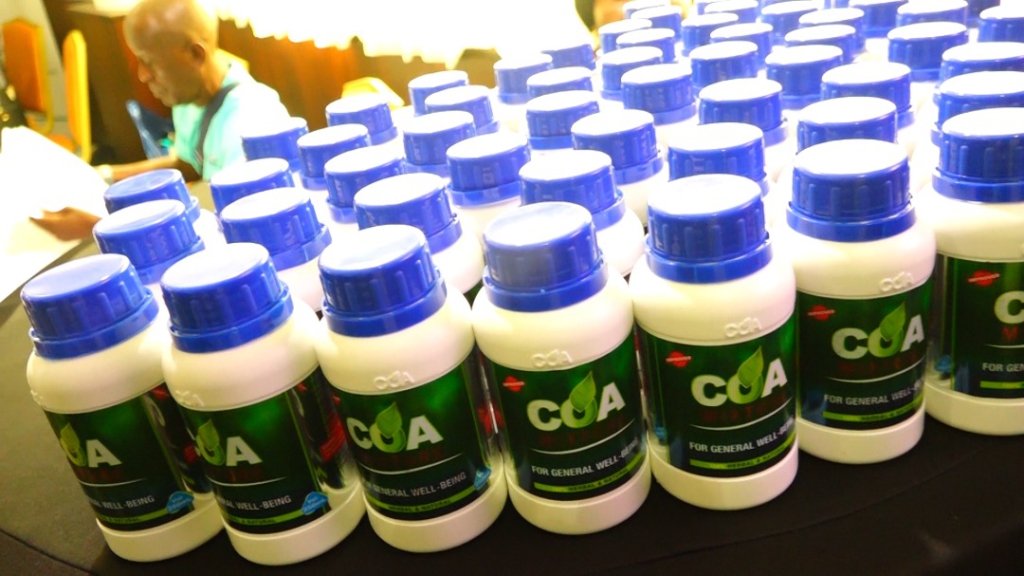 The Center of Awareness (COA) research and manufacturing Company Limited, has launched the COA mixture reloaded, formerly referred to as COA FS for effective use.

The mixture seeks to improve the wellbeing of users to fight against several chronic conditions.

This was reveled at the launch of the COA mixture in Accra which brought together various stakeholders.

The re-launch follows the Food and Drugs Authority’s (FDA) authorization for the product to be marketed as a herbal medicine.

Following the approval by the FDA, COA FS, as was previously referred to was known as a food supplement, but has currently been formulated as a herbal medicine with the rebranded name COA mixture.

The rebranded COA mixture is expected to serve as an immune booster to enhance the wellbeing of users.

As part of ways to outdoor the rebranded mixture, a grand event was held at Alisa Hotel in Accra which brought together stakeholders including representatives from the Ministries of Health and Trade, the Center for Plant Medicine Research and the Ghana Medical Association, amongst others.

During the re-launch of COA mixture in Accra, the CEO and Founder of the COA Research and Manufacturing Company Limited, Prof. Ato Duncan, said the product will strengthen the immune system of users to fight illness.

He further debunked claims that the COA mixture can cure HIV/AIDS. According to him the product is yet to be confirmed as a cure for the deadly virus.

“An oversight committee has been set up by government to do evaluation into finding the cure for HIV, but that involves a lot of medication and that research has not been completed. We don’t have any cure for HIV on the market at the moment. What we have on the market is for your general well-being”

Also speaking at the event, the Minister for Trade and Industry, Alan Kyeremanten, said the work of the company is in government’s line of diversifying the economy to create more job opportunities.

“It is one of the strategic sectors that Ghana is developing to diversify our economy from Cocoa and Gold. The development of plant medicine generally could help create jobs. We all know that one of the major challenges confronting the country is unemployment. This will not just create jobs but will create high quality skilled jobs.”

Stakeholders including the Ghana Medical Association, Center for Plant Medicine Research, Ghana Association of Medical Herbalists and the Ghana Federation of Traditional Medicine Practitioners took turns to offer their solidarity messages at the event.

The company also donated GHS100,000 to GHAFTRAM to aid in their research works.