He said Christians and Muslims constituted a larger population globally and it was imperative to sustain the dialogue between the religious bodies for continuous peace and unity.
The Professor said this at a national maiden dialogue of Muslim leaders and Catholic leaders in Accra.
“The purpose of a dialogue is to learn and change and come to consensus on issues of interest. We listened to the other partner for understanding devoid of any untoward situation,” he said.
Prof Azumah said Pope John Paul in a meeting in Morocco in 1985, stated that dialogue between Christians and Muslims was essential for the peace of a country.
He called on the leaders of the religious bodies to continue to preach religious tolerance to consolidate the peace and tranquillity the country had enjoyed over the years.
“We need to engage with one another and build partnerships. The scripture says” blessed are the peacemakers, for they shall inherit the kingdom of God”.
He admonished all to do everything possible to maintain peace with one another and urged religious bodies to address issues of religious worship at various educational institutions in the country.
Dialogue, he stated, helped to bring diversity in society and emphasized that engagement between religious bodies should be a long-term commitment to actualize the tenets of peace and unity.
He urged other countries to emulate the gesture of Saudi Arabia for organizing its maiden interfaith conference to promote religious tolerance. 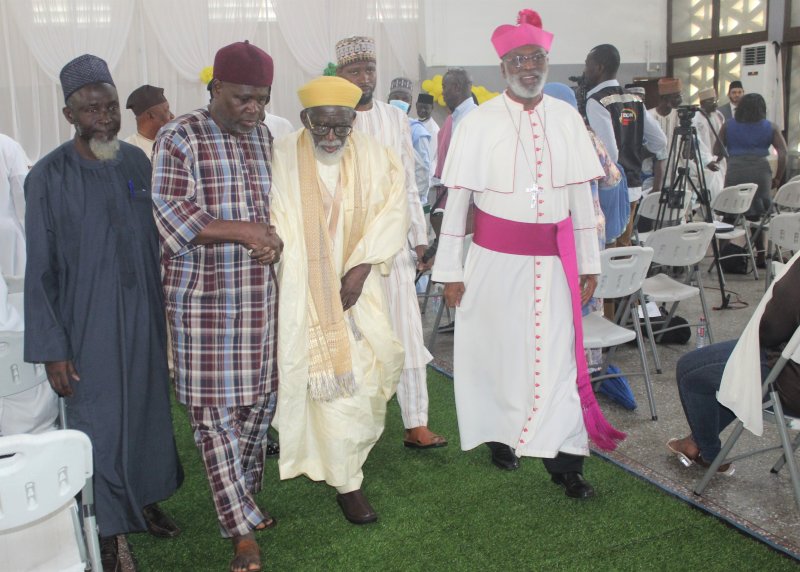 Most Reverend Philip Naameh, the President of the Ghana Catholic Bishop’s Conference, said the dialogue between religious bodies was engineered by the Pope when he invited all Catholics to consider Muslims as members of their family because the Church had high regard for Muslims.
Rev Naameh, who is also the Archbishop of Tamale, said the plan of salvation included all human beings without distinction, calling for the need to advance social friendship to serve as a model for other countries to learn from.
Sheikh Dr. Osmanu Nuhu Sharubutu, Ghana Chief Imam of Ghana, expressed concerns about religious conflicts in some parts of the world, stating that the dialogue would serve as a platform to end the conflicts and embrace one another.
He said his love for humanity and religious tolerance made him visit the Christ the King Catholic Church, and that the gathering would prevent evil deeds and embrace good fortunes.
Mr Benjamin Afful, the Chief Director, Ministry of Chieftaincy and Religious Affairs, called for continued engagement on the issues or sustained national development.
All the religious sects pledged their support to ensure religious tolerance in the country because without peace there will be no development.