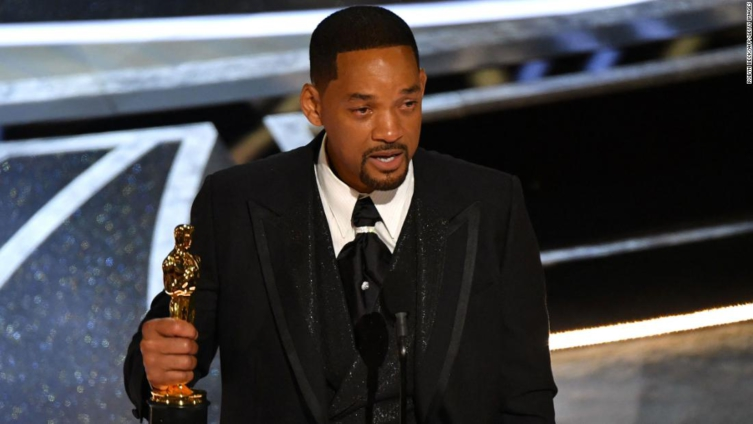 Will Smith saw a vision of himself losing his Hollywood career prior to the uproar he caused at the 2022 Oscars.

The “King Richard” star, 53, in April was banned from attending any Academy Awards events for 10 years after slapping presenter Chris Rock during this year’s ceremony.

Prior to the event Will Smith opened up to David Letterman about the vision he had after drinking the psychoactive brew ayahuasca, which he called “the individual most hellish psychological experience of my life.”

Smith discussed the experience during an episode of Letterman’s Netflix series “My Next Guest Needs No Introduction,” which was taped before the Oscars fiasco.

In the nearly hour-long pre-recorded interview, which featured Smith and Letterman both walking around the Sunset Strip in Los Angeles and chatting onstage at The Comedy Store in front of an audience, Smith opened up about how he had long used comedy as a coping mechanism — in part because he always saw himself as a “coward” after experiencing a childhood trauma.

“I think the drive I had in my career to succeed with the life-or-death energy behind winning, I think it was fueled largely by a certain insecurity,” he said. “And the trauma of the insecurity, I think, made me have to win. Period.”

Smith explained that following his 2007 film “I Am Legend” he realized his commitment to success was unhealthy.

He went 14 days without talking to “see the madness of what was going on inside (his) head.”

“I had been to the top of all material mountains,” he said. “I wanted to be the best but I correlated being the best with having the love in my life that would make me feel safe.”

“I think it’s the natural journey of humanity, when we realize that the material world is completely, utterly and totally incapable of sustaining our happiness.”

He said that his worldview is now that “anything can be gone in one second.”

He took two years off from work and went on a spiritual journey, he said.

During that time, Smith said he did ayahuasca, a psychedelic drug known for its spiritual and therapeutic qualities, 14 times — including the aforementioned trip that he characterized as the “individual most hellish psychological experience of my life.”

“All of a sudden, it’s like I start seeing all of my money flying away,” he recalled.

“And my house is flying away. And my career is going away,” he continued. “And I’m trying to, like, grab for my money and my career. My whole life is getting destroyed.”

When Letterman asked Smith if losing his career and money was something he feared in real life, the actor responded, “It’s my fear.”

Panting in terror, Smith said he then heard the voice of his 21-year-old daughter, Willow, screaming to him, “Daddy, help me! How come you won’t help me?”

When the shaman overseeing the ceremony stepped in to force Smith to relax, Smith’s vision morphed.

After he’d “settled down,” Smith continued hearing Willow calling to him for help.

“I still hear Willow screaming,” he said, adding that the money was still flying away but he’s was taking slow, meditative breaths.

“And I’m totally calm, even though there’s hell going on in my mind.”

The experience taught Smith that he can endure hardships in his life, he said.

Smith, who has apologized publicly for his behavior at the Oscars, also told Letterman that he believed many of his worst fears weren’t based in reality.

Season 4 of David Letterman’s “My Next Guest Needs No Introduction” is streaming now on Netflix.