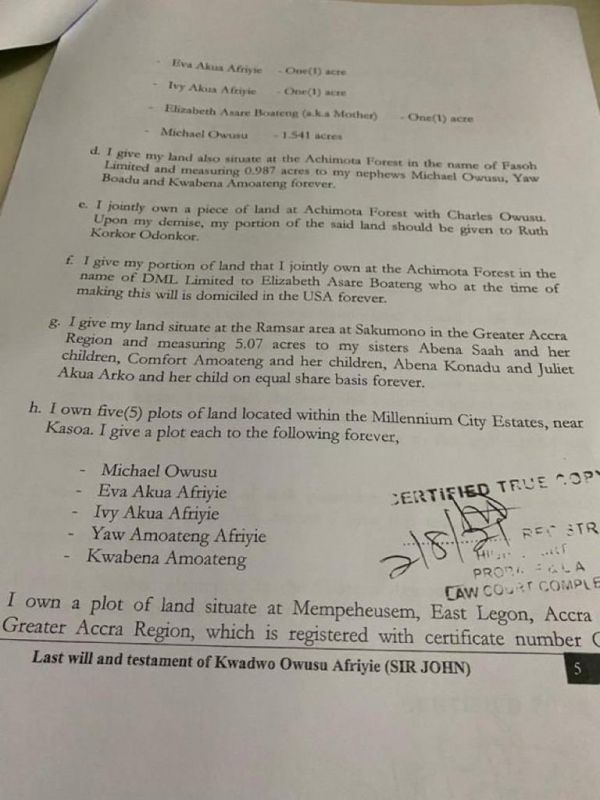 Forty-four year-old Charles Owusu, a former aide to the late Kwadwo Owusu Afriyie, who until his death on July 1, 2020 was the Chief Executive Officer of the Lands Commission, has expressed disgust that the private will of his late boss is being discussed in public.

Owusu who is named in Owusu Afriyie, aka Sir John’s will as an executor and beneficiary of his estate, said the circulation of Sir John’s will on social media, a private testament, is not only a sad development but also contrary to established Ghanaian customs and traditions.

He suspects the whole exercise of leaking and circulating the will on social media aims to disgrace his former boss, who was once the general secretary of the ruling New Patriotic Party.

In the meantime, he has nothing more than best wishes for whoever is behind it.

Charles Owusu was commenting on the development on Asempa FM on Monday after it emerged that the late Lands Commission boss had allegedly willed several acres of the Achimota Forest to his family members and others.

He described the discussion of the will of the late Sir John as disgraceful, and insisted he was not one to turn his back on his former boss, saying Sir John took him in as a younger brother, a son, and a nephew, and for which he would forever love him.

Asked if he was the Charles Owusu named in Sir John’s will as the beneficiary of a piece of land in the Achimota Forest, he said it was not until after his boss died that he came to know that he is an executor of his estate.

The Achimota Forest has been in the news in recent weeks following what government describes as the declassification of the peripherals in order to return it to its original owners.

Many civil society organisations and individuals have spoken again government’s actions, with some alleging the steps would affect the ecological integrity of the forest while the lands would also be distributed among government functionaries, claims the government has denied.

Following the circulation of the said will of Sir John, the Lands and Natural Resources Ministry says it is investigating the will and its claims to ascertain its veracity.

I save £500 a month working in UK; I won’t come back – Ghanaian-trained nurse