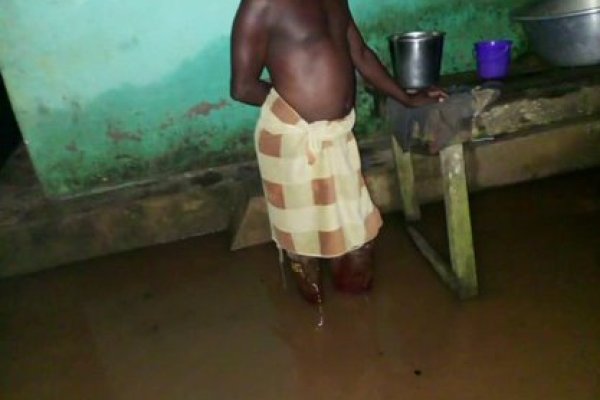 Akosonu (W)R), May 23, GNA- Akosonu,a farming community near Gwira Dominase in the Nzema-East District of the Western Region has been submerged in water following Sunday’s downpour.
It has rendered many people homeless and it is also feared that the flood could collapse many buildings mostly made of mud.
Chairman of the Youth Committee,Mr.Alex Dadzie told the Ghana News Agency in an interview that his own building had been submerged in the flood making life unbearable for him and his family.
According to him, many people in the community were rendered homeless and property worth hundreds of cedis destroyed.
Mr.Dadzie attributed the flood situation in the town to the shoddy work on a feeder road leading to a galamsey site, as it was done without gutters and culverts.
He said galamsey activities in the community had polluted their river bodies, notably the river Ankobra with the rippling effects of major floods.
Mr.Dadzie appealed to NADMO and the Nzema-East Municipal Assembly to support them to avert further calamities and casualties.
Meanwhile, the Municipal Chief Executive (MCE) for Nzema-East, Madam Dorcas Elizabeth Amoahin ann interview with the Ghana News Agency expressed worry over the situation in the Akosonu community.
She however, told the GNA of dispatching the National Disaster Management Organization (NADMO) to assess the extent of damage.