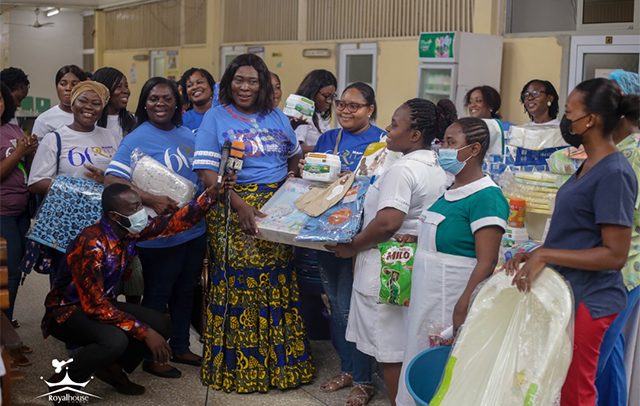 The Royalhouse Chapel International (Ahenfie) through its Women’s Ministry, ‘Royalladies’ has embarked on a nationwide initiative to discharge women detained at various hospitals over non-payment of bills.

A total of 59 mothers benefitted from the initiative dubbed: baby project.

The forms part of the activities lined up for the 60th birthday celebration of the President of the Royal ladies Ministries International Rev. Mrs Rita Korankye-Ankrah which is on May 23.

The 60th birthday celebration has been themed “A Mother, Her Calling, Her Example”.

The local assemblies of the church visited various health facilities across the country and settled the bills of these mothers.

Aside that, the beneficiaries also received baby products including diapers, toiletries, baby clothing, and undisclosed amounts of cash to the mothers. They also donated equipment to the hospitals.

Mrs Kronkye-Ankrah has already visited her Alma Mata, Zion College at Anloga in the Volta Region to give back to the school.

Seven mothers were also discharged in the Volta region while 22 mothers in the maternity ward received various items including tissues and detergents.

Vice President of the Ministry, Rev Dr Mrs Anastasia Yirenkyi, led the visitation and donation at the various facilities.

She explained it is one of their core areas of intervention to pay bills for mothers as well as provide care and support items to the newborns.

She revealed that, the youth choir of the church, Voices In Worship (VIW) has over the years embarked on such projects with the support of leadership.

Rev Mrs Yirenkyi used the opportunity to call on well-meaning Ghanaians and organisations to emulate the gesture.

The group also paid for blood for another mother who was in a critical condition and also donated two medical equipment to support the hospital’s maternity ward.

A total amount of GH¢51,997.00 was used to finance the project and the mothers were full of praise after the act.