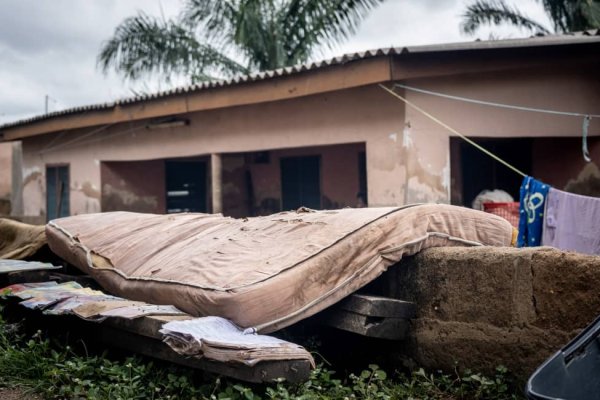 Accra, May 23, GNA – A family of three Saturday had to latch on unfastened door as rainwater swamped their bedroom, soaked their clothes and other items following hours of downpour in Accra.


Auntie Naa, 60, who lives at Tetegu, a suburb of Accra, said she and her two children watched their bed, clothes and other valuable items inundated as the rain poured relentlessly throughout the night.

She told the GNA the level of the water was high and that at a point , all she cared about was her children’s safety.

Auntie Naa said as the situation  eased they cleaned the room partially for some space, cleared the debris and awaited the morning for the greater cleaning ‘job.’

Her completely soaked mattress was dried in the humid weather on Sunday as her children busily salvaged some of the soaked items.

A man in his 70s was also spotted with a bucket of water walking through the floodwaters in the community as his wife looked on distraught.

An official from the National Disaster Management Organisation told the GNA on Sunday that no one was reported dead as a result of the flood.

The capital has over the years witnessed unceasing floods at the slightest rainfall, with many calling on city authorities to find a lasting solution to the perennial flooding.

Many, including experts, have attributed the situation to poor solid waste management.

Mr George Ayisi, Communications Director of NADMO said what was experienced on Saturday was “flash flooding” peculiar to urban cities due to some activities, including blockage of drainage systems.

He said preliminary reports indicated that no lives were lost, adding that a NADMO search and rescue team had been dispatched to assist displaced persons.

Regarding the engineering aspect of the flooding situation in Accra, he said, there had been series of consultation, adding that last year, consultants from the World Bank were in the country in relation to the Greater Accra Resilient and Integrated Development (GARID) project – a project intended to stem the trend of flooding in the national capital.

The NADMO Communications Director said the areas that distressed calls came from during the Saturday rain were areas that mostly got flooded.

He said an assessment was being conducted for relief support to those affected, adding that, in the interim, persons who were trapped had been brought to safety.

Mr Francis Asenso-Boakye, Minister for Works and Housing, during a tour of some affected areas in the capital, said the haphazard development of communities, with people continuing to build on waterways without the necessary building permits from the District Assemblies was a major problem.

“It is the responsibility of the District Assemblies to ensure that they issue permits and whenever permits are not issued, they should be decisive and pull-down structures on waterways,” he said.
Mr Asenso-Boakyi said some drastic actions and measures were needed since the problem was already known.

He said such action was in three levels beginning at the central government, which had seen the Government, in the last five years, investing GH¢450 million in the construction of drains.

He said a series of other interventions were being undertaken to deal with the situation hands-on, stressing that District Assemblies should ensure that permits were secured before buildings were put up.

He was hopeful the GARID project would end the perennial flooding occasioned by poor sanitation and drainage infrastructure, overcrowded spaces, and weak regulatory enforcement.