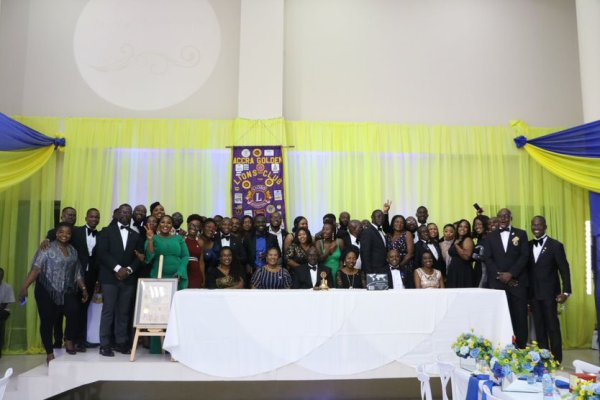 Accra, May 23, GNA – The Accra Golden Lions Club has organised a fundraising dinner to raise funds to support the Diabetics Centre of the Korle-Bu Teaching Hospital (KBTH).
The event, which was part of its 30th Charter Anniversary, was aimed at raising funds to purchase a Retinal Camera, furnish a training room and build a therapeutic garden at the newly constructed Diabetics Centre at KBTH.
The anniversary ceremony intends to raise further funds towards the refurbishment and acquisition of equipment for the centre at a cost of GHC 150,000.
Speaking at the event, Madam Zainab Mahama, President of the Accra Golden Lions Club, noted that already the Club, through the instrumentality of its professionals, had constructed a shelter at the Diabetics Centre to ensure the comfort of patients who visit the Centre.
She commended its members for serving the Club and humanity for all these years, doing their best in making the world a better place.
Madam Mahama, who touched on a number of projects under her tenure, said: “we are confident that Accra Golden Lions Club will rise to the challenge based on its solid foundation and continue to play a significant role in the advancement of District 418, as well as Lions Clubs International”.
Mr Joseph Boahen Aidoo, Chief Executive Officer of the Ghana Cocoa Board (COCOBOD), described the club’s gesture as a worthy cause considering the number of lives diabetes tormented.
He said the anniversary project was an immediate action taken, which had to do with resourcing the Centre
He also advocated the regular consumption of cocoa products due to the numerous health benefits, saying, cocoa contains carbohydrates, protein, minerals and vital active compounds that prevent diabetes and other chronic diseases.
Dr Yacoba Atiase, Head of Diabetes Clinic at KBTH, praised the Club for supporting the Centre and coming to the aid of patients.
She mentioned that the National Diabetes and Research Centre was established in 1995 as a center of excellence with a core mandate of managing patients with diabetes and importantly to prevent complications of diabetes.
Dr Atiase said the objectives of the centre covered training and research, as such, the Retinal camera would not only be used to diagnose patients effectively but the pictures taken would be used to train young Doctors, specialists and other health practitioners across the country.
Among dignitaries present at the event included Madam Sally Wilson-Brown, Charter President of the Accra Golden Lions Club; Madam Helen Maku Obeng, the immediate past District Governor of District 418 (D418) of the Lions Club International.
The Charter for Accra Golden Lions Club was signed on 1st May 1992 by the then International President and Secretary of Lions Clubs International.
And since then, the Club has devoted itself to serving their community.
The Lions Club International is the largest voluntary service organization that aims to serve communities and meet humanitarian needs.
The Lions Clubs in Ghana, over the years, have been embarking on a few impactful services and volunteering activities aimed at improving the welfare of humanity, particularly the underprivileged in society.
It has five service areas, namely ‘Diabetes, Environment, Hunger Relief, Childhood Cancer and Vision.’