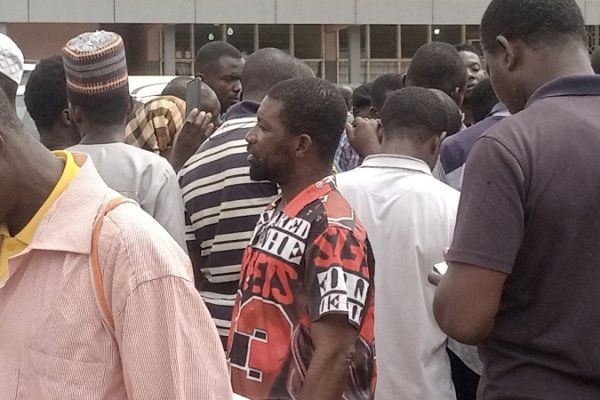 Sunyani, May 22, GNA – Some aggrieved farmers within the Ahafo South Mine enclave of the Newmont Ghana Gold Limited (NGGL) in the Ahafo Region has besieged the premises of the Sunyani High Court amidst tight Police presence.
Numbering more than 100, the visibly angry farmers, clad in red headgears and armbands were at the high court to seek an order to restrain the NGGL from undertaking compensation valuation of lands at Afrisipakrom and Yamfo in the Mine’s concessional area.
The farmers, drawn from Afrisipakrom, Yamfo, Adrobaa, Techire and Susuanso are members of the Ahafo North Property Owners and Farmers Association, a group comprising local farmers within the 10 Newmont Ahafo mine-take communities.
An accompanying affidavit filed by David Rockson Tabiri Boahen of “Sarpomaa Chambers”, a Sunyani-based legal firm and Counsel for Ali Baba Mohammed, one of the aggrieved farmers noted the NGGL had failed to comply with all the laws, regulations and rules laid by the state to regulate compensation processes.
A copy of the affidavit made available to the Ghana News Agency (GNA) in Sunyani explained in 2021, the NGGL commenced fresh engagement with the affected communities and formed a Resettlement Negotiation Committee (RNC) that would facilitate payment compensation to affected farmers by the Mine’s operations.
The RNC, composed of five representatives from each of the five affected communities were tasked to find and engage qualified expert to lead them in negotiations and assessment for fair and adequate compensation.
“Representatives from Afrisipakrom, Susuanso, Adrobaa, Techire and Yamfo, all resolved to engage their own preferred qualified person or expert to represent them in the negotiation and assessment of the compensation, which NGGL accepted, but rejected those of Yamfo and Afrisipakrom in violation of the plaintiffs’ legal right to representation of their choice”, it stated.
“All amiable attempts and efforts by the plaintiffs to the defendant to allow the plaintiffs to engage a qualified expert or person to represent their interest and lead the negotiation and assessment in accordance with law and regulations governing the process have been opposed and rejected by the defendants”.
“Recognition of qualified person engaged by the plaintiffs by the defendant is necessary because plaintiff is required by law to pay all professional fees and expenses incurred by the qualified persons in undertaking the instructions by the plaintiffs”, the affidavit explained.
It said the reject of the plaintiff’s preferred valuer or expert to represent them in the negotiation and assessment of compensation to be paid to the plaintiffs remained a violation of law and legal rights of the plaintiffs.
The affidavit therefore added if the right thing was not done the affected farmers would suffer hardships, and therefore prayed the Court to push the NGGL to comply with the laws governing the compensation assessment and negotiation process.
In a related development, Nana Ansah Adu Baah II, the Paramount Chief of Yamfo Traditional Area and also the President of the Ahafo Regional House of Chiefs has appealed for out-of court settlement.
Speaking in an interview with the GNA, Nana Baah II, who was also at the Court premises said a meeting had been arranged between the counsels of NGGL and the affected farmers and expressed the hope the engagement would be fruitful for mutual benefit.
He therefore appealed to the farmers to remain calm, saying “we would not sit unconcern for anybody to cheat you”.
Nana Baah II urged the farmers to refrain from any behaviour that could disturb the peace of the area, and reminded them that the company had already secured the right to mine in the Ahafo North concessional area.
Later in an interview, Dr. Samuel Kumi, the spokesman explained the Association sought support from the Global Greengrant Fund to undertake advocacy campaigns to tackle the challenges confronting mining companies and their host communities.