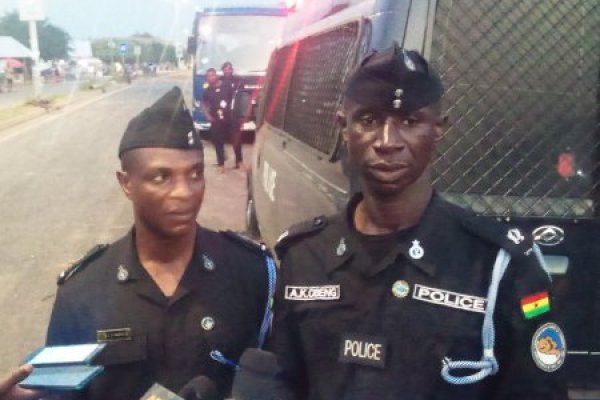 Nkoranza (BE/R), May 19, GNA -The Ghana Police Service has assured residents of Nkoranza and its environs to remain calm as investigations are still on-going to ensure all perpetrators involved in criminalities and destruction of Police facilities are arrested.
Superintendent Alexander Obeng, Director of Public Affairs of the Ghana Police Service gave the assurance at a media briefing at Nkoranza, in the Nkoranza South Municipality of Bono East region.
Supt. Obeng said five persons were arrested in connection with attacks on two-state facilities, the Nkoranza Divisional and Municipal Police Headquarters.
“In the course of the attacks some suspects who were in our custody escaped but one has been captured, while the rest are being pursued to be recaptured into lawful custody”, he said.
He appealed to the suspects who unlawfully escaped from the Police custody to surrender in their interest.
It would be recalled that a number of the youth of Nkoranza on Tuesday went on rampage and caused mayhem in the Nkoranza town to demand justice for one of their own, late Albert Donkor who disappeared from Police custody and died suspiciously five days ago while assisting the Police in the investigation into an alleged armed robbery case in the area.
The body of Donkor, aged 27 was found and identified with gunshot wounds in the bush at the outskirt of Nkoranza.