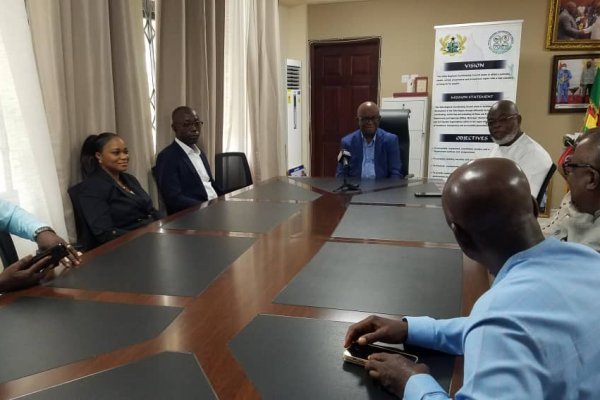 Ho, May 17, GNA- Mr Peter Kwakye-Ackah, Member of Parliament (MP) for Amenfi Central Constituency of the Western Region, has expressed awe in the natural wealth of the Volta Region.
The MP who was a first-time visitor to the Region, said he had been immersed into what he claimed was unknown to the world.
“Volta Region is very endowed but it is not known. When you come, you will see it for yourself. The scenery is very imposing,” Mr Kwakye-Ackah, who is a member of the Public Accounts Committee, said during a courtesy call on the Volta Regional Minister in Ho.
Mr James Klutse Avedzi, MP for Ketu North, and Chairman of the Committee, said negative perception kept the captivating scenery, tourism, and industrial potentials from view, and called for special focus on addressing the lapses.
Mr Emmanuel Kwasi Bedzrah, MP for Ho West, commended the efforts of Dr. Archibald Yao Letsa, the Volta Regional Minister, and traced his collaboration with MPs from the area towards the elevation of the Region.
He said the Regional Minster had succeeded in getting the government to, notably, prioritise roads in the Region, as well as other infrastructure including the Ho Airport, and was hopeful the working relations would be sustained towards the ultimate.
Dr. Letsa also extolled MPs from the Region for “doing their best,” and said the people of the Region needed to grasp the concept and help promote the Region.
He said collaborative initiatives including the Volta Fair, and the Visit Volta campaign, all had proven potent in marketing the Region and diverting in tourist traffic, adding, “very impressive numbers were recorded this, Easter.”