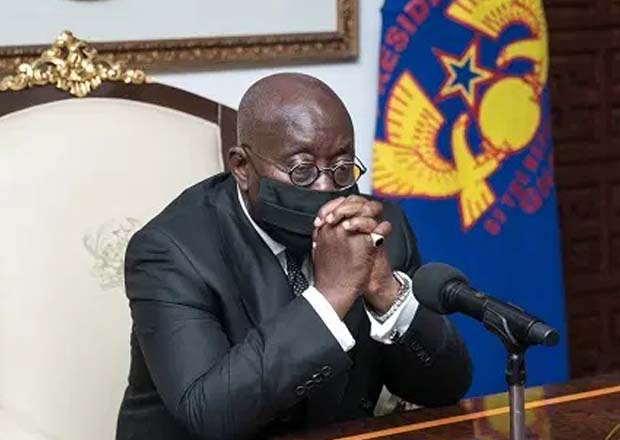 President Akufo-Addo has paid glowing tribute to the memory of the late Sheikh Khalifa bin Zayed Al Nahyan.
This was when he visited the residence of the UAE Ambassador to Ghana to sign a book of condolence opened for the late President, describing him as a distinguished servant of his people and a friend of Ghana.
The respected Sheikh who died on May 13, 2022, at the age of 73 was the ruler of Abu Dhabi and President of the United Arab Emirates (UAE).
He was received by the Charge d’Affairs, Amer Jamil Ali Al Alawi.
“A great friend of Ghana and a distinguished servant of his people has gone to meet his maker”, he wrote.
He, therefore, noted that “the entire people of Ghana and their government join me and my wife and family in expressing our sincere condolences and deep sympathies over the loss of this eminent ruler.”
“May his soul rest in perfect peace in the bossom of the Almighty” President Akufo-Addo added in his eulogy.
Sheikh Khalifa bin Zayed Al Nahyan died at the age of 73 in the UAE, the Emirati News Agency, WAM, reported on 13 May 2022.
He has since been buried in line with Islamic tradition and Sheikh Mohamed bin Zayed Al Nahyan has been elected as his successor by the Federal Supreme Council of the United Arab Emirates.
Al Nahyan was the second president of the UAE, as he assumed this position and ruled the Emirate of Abu Dhabi on Nov. 3, 2004, succeeding his father, Sheikh Zayed bin Sultan, the founder of the Emirates.
He was born in 1948 in the UAE city of Al Ain and he is the eldest son of Sheikh Zayed bin Sultan.
In his youth, Khalifa remained a companion to his father during his work on the founding of the UAE, which was achieved in 1971.
Sheikh Khalifa was appointed the head of the courts in Abu Dhabi, where his father was the ruler in 1966.
He held many positions until he became the chief executive officer of the government and the supervisor of the implementation of all major projects.
In 1969, he was appointed the crown prince of Abu Dhabi, and also assumed the duties of the Defense Department that constituted the basis for the formation of the UAE Armed Forces.
Two years later, he was appointed the ruler of Abu Dhabi and the local minister of defense and finance in the emirate.
He also took the position of deputy prime minister in 1972 and supervised the executive council in achieving comprehensive development programs in the emirate.
In November 2019, the UAE Federal Supreme Council renewed its confidence in Khalifa bin Zayed as the chairman of the Federal Supreme Council for a fourth five-year term.