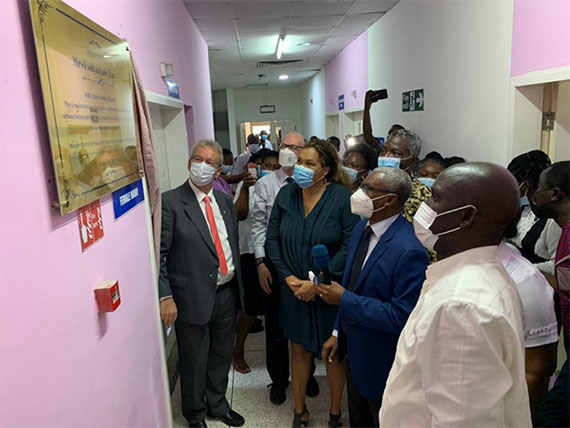 Dr. Ali Samba (2nd from right) with Jill Tay and other officials unveiling the plaque

The dedication of the ward was in memory of the late Mrs. Evelyn Tay, who played an instrumental role in mobilising funds for the construction of the Lions International Eye Centre and ensuring that the building project was completed.

A plaque which read, “The Loins International Eye Centre could never have been realised without tireless, selfless and outstanding work by Evelyn Tay to whom we owe the deepest gratitude. We give thanks for the dedication and humour she brought, enabling treatment and training to combat blindness in Ghana and through West Africa,” was unveiled at the entrance of the ward.

Director of Medical Affairs, Dr. Ali Samba, who represented the Chief Executive Officer (CEO), recounted his encounter with the late Mrs. Tay, describing her as full of energy and wanting things done.

“I am aware that she was instrumental in getting the plastic surgery centre done, which is a centre of excellence now. The centre is forever grateful to the late Mrs. Tay,” he said, adding, “Her contribution has been enormous. It is unfortunate that this is happening when she is not around, it would have been nice for her to see what we are doing.”

Chair of the Moorfield Lions Korle Bu Trust, Mr. Howard Lee, and Dr. Ian Murdoch, Consultant Ophthalmologist, University College London, who worked with the late Mrs. Tay, eulogised her for her resolve to raise funds and see to the establishment of the eye centre in Ghana.

Head of the Eye Department, Dr. Yakubu Seidu Adam, said over 200 people access services at the eye centre on a daily basis, with several surgeries conducted to save people from losing their sight.

Daughter of the late Mrs. Evelyn Tay, Jill Tay, MBE, expressed her gratitude to the eye centre for honouring her mother. She also assured that her family would continue to support the work their late mother started.