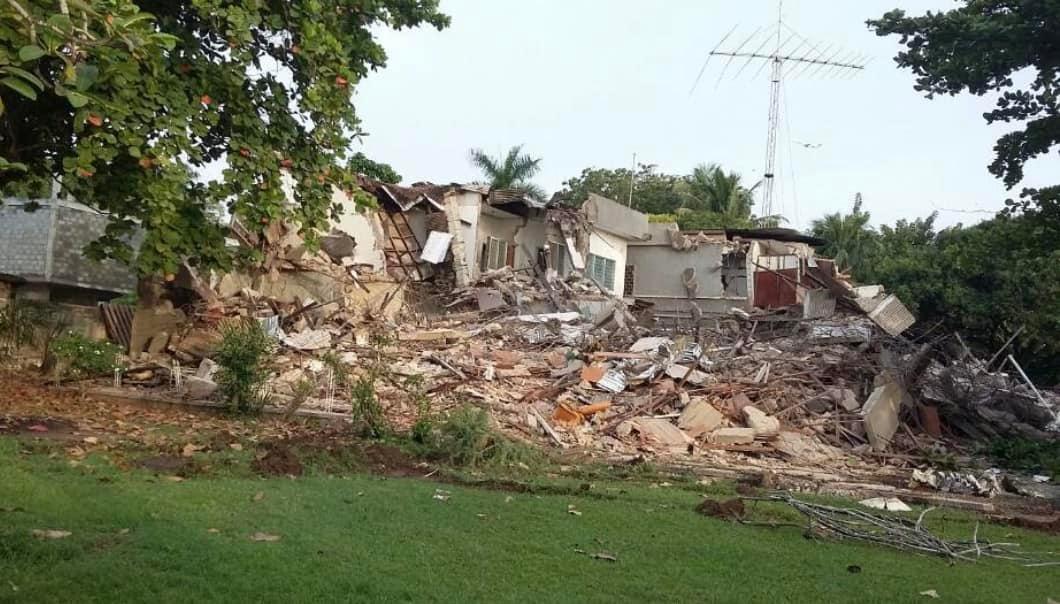 The Minority in Parliament has accused government of attempting to shield officials in connection with the demolition of the Bulgarian Embassy.

To them, government’s deliberate attempt not to make the report public smacks of dishonesty and complicity – a situation that must be condemned.

A Sole Inquirer, Justice Kwasi Anto Ofori Atta, a retired Justice of the High Court, was appointed on March 18, 2022, to investigate the Bulgarian Embassy land matter to present his report.

But the Ministry of Lands and Natural Resources has released parts of the report which among other things recommended the sanctioning of the supposed private developer who caused the destruction and directed him to pay compensation to affected persons.

The Ministry has also directed that, there should be ‘no further developments’ on the land housing the demolished facility pending the final determination of legal matters.

But the Minority cannot fathom why the full report has not been released to the public.

A statement signed by the Ranking Member of the Foreign Affairs Committee, Samuel Okudzeto Ablakwa questioned why the government has not identified officials at the Lands Commission implicated for sanctions.

The statement added that, the cover-ups will not prevent a future NDC government from launching a full-scale investigation into the demolition.

“These cover-ups and pathetic whitewash will not prevent a future NDC government from launching a full-scale, no-holds-barred probe and a strict regime of punishing all complicit officials in the entire value chain within a more credible, patriotic and internationally acceptable best practice effort to restore Ghana’s once enviable reputation within the diplomatic community,” parts of the statement read.

Below is the Minority’s full statement:

The Lands and Natural Resources Minister’s statement on the infamous Bulgarian Embassy demolishing, regrettably, has all the qualities of a farcical cover-up and whitewash which confirms the suspicion we have always had based on government’s opaque conduct in this sordid affair of monumental international embarrassment.

Apart from confirming that the Bulgarian Embassy was illegally demolished under their watch, the government’s statement is a preposterous attempt to shield state officials who have done great damage to our country’s image in the comity of nations.

The NDC Caucus in Parliament demands immediate answers to the following questions:

1) Why is government refusing to publish the full report of the Sole Inquirer? What are they hiding?

2) Why is government silent on its obligations under the Vienna Convention on Diplomatic Relations, 1961 which imposes a “special duty” on the Ghanaian government “to take all appropriate steps to protect the premises of the mission against any intrusion or damage and to prevent any disturbance of the peace of the mission or impairment of its dignity?”

3) Why is government not identifying complicit officials at the Lands Commission for sanction when in government’s own words: “Since the registration of the assignment of Dr. Yaw Adu-Ampomah is found, as indicated in the Sole Inquirer’s report to have been improperly obtained, the Ministry has further directed the Lands Commission to take the necessary steps to withdraw consent granted to the said assignment and registration of the interest of Dr. Yaw Adu-Ampomah?”

4) How could Jojo Hagan be portrayed by government as a lone wolf when he enjoyed great collaboration from agents of state including officials of the Lands Commission all the way to operatives of the national security apparatus?

5) Why did the Sole Inquirer not invite the Bulgarian Ambassador, H.E. Yanko Yordanov, despite his spirited effort to be heard by the Sole Inquirer? Engaging only his subordinate, the Honorary Consul was most inadequate and inappropriate.

6) Why is the Lands Minister now seeking advice from the Attorney-General on how sanctions should apply against the apparent scape goat, Jojo Hagan? Political opponents of this government are not treated with such kid gloves — they are promptly arrested and prosecuted.

7) What is the nature and value of compensation Jojo Hagan owes the Bulgarians?

8)Why is there no specific time frame for redeeming the said compensation?

9) Why is government protecting Dr. Yaw Adu-Ampomah, the President’s appointee at the NDPC, despite his clear complicity in inappropriately obtaining registration from the Lands Commission and defying the Foreign Ministry and Lands Ministry at various points as he continued with impunity to build his humongous structures?

10) Considering that these demolishing of diplomatic properties have happened twice only under this Akufo-Addo government in Ghana’s entire 65-year history (to the Nigerians and the Bulgarians), why is there no concrete finding(s) on the causes, deliberate fault lines being exploited and commitments/assurances to prevent this colossal diplomatic embarrassment from recurring?

The NDC Caucus in Parliament shall be pursuing these germane questions from Ministers of State when Parliament resumes next week.

We also wish to serve strong and unambiguous notice that these cover-ups and pathetic whitewash will not prevent a future NDC government from launching a full-scale, no-holds-barred probe and a strict regime of punishing all complicit officials in the entire value chain within a more credible, patriotic and internationally acceptable best practice effort to restore Ghana’s once enviable reputation within the diplomatic community.