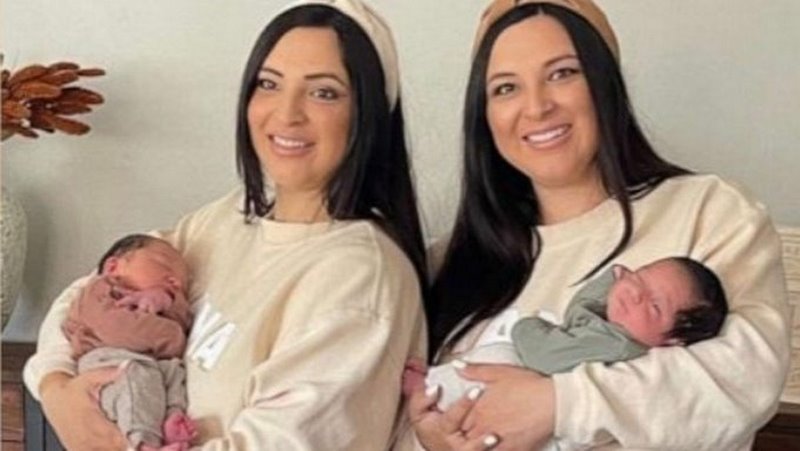 A pair of identical twins have joked it was “supposed to be” after giving birth to their sons – who weighed and measured exactly the same – on the same day.

Jill Justiniani and Erin Cheplak welcomed sons Silas and Oliver just hours apart and just a few rooms away from each other in the same hospital.

Each baby came into the world weighing 7lbs 3oz and measuring at 20cm in length, People Magazine reports.

Although the twins, from California, planned on getting pregnant at the same time so they could raise their kids together, they admit they never could have envisioned the boys would have the same date of birth.

Jill was scheduled for a C-section on 5 May after doctors discovered Oliver was in the breech position – so she already knew her exact due date.

But Erin’s labour was more of a surprise when her waters unexpectedly broke on the morning of 5 May.

After calling her husband Zach to come home from work and take her to the hospital, Erin’s next phone call was to her sister to tell her she’d see her there.

While Jill and her husband Ian waited for the C-section, which was delayed by a few hours, they joined Erin and Zach in their room while Erin had contractions.

Erin said: “It was the four of us and all being a support system together. They were there for my strong contractions, I could not have gotten through that without that support.”

Oliver arrived at 6.39 pm, and Silas followed at 11.31 pm. And when both boys’ measurements were taken, the parents were shocked to learn they were exactly the same.

For the twins, the similarities in their pregnancies aren’t much of a surprise as they have spent their entire lives living in sync.

Jill said: “My parents would talk about how we had our own language together. We’d be in our cribs side to side and make these cooing sounds. I’d make a sound and Erin would respond.”

When the girls were six, their baby sister Allison was born, but she had a rare genetic disorder that meant she was constantly in and out of hospital.

Tragically, Allison died when the twins were 12 – but their experience with their sister motivated them to study occupational therapy to help other children with disabilities. The pair now work together in the same clinic.

Jill and Erin also live just five minutes away from each other, meaning they’ll be able to raise their boys side-by-side.

“That’s just another really special thing for our sons — they’re going to have a sense of closeness that they can also rely on each other the way that my sister and I did,” Jill said.

The new mums say their babies are already bonding and see each other almost every day.

Erin said: “This brings such joy to us and I’m so happy to share it with others.”