Probing absentee MPs wrong; posterity will remember me for attempt to block it

How I saw Sandra’s n€ked photo on my husband’s phone – Lilwin’s former wife speaks, says she’s ready to curse her if she denies 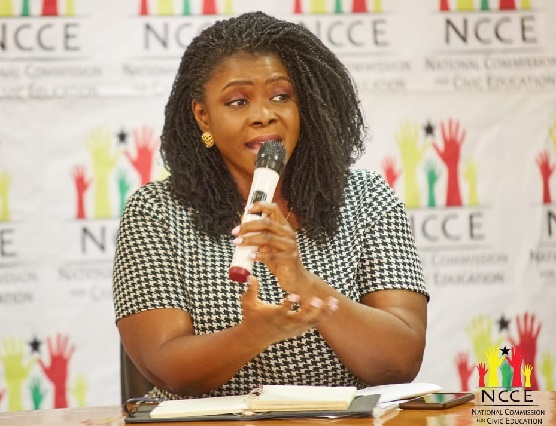 ACTING CHAIRPERSON of the National Commission for Civic Education (NCCE), Kathleen Addy, has urged Ghanaians to avoid persons who advocate for the “overthrow of the constitution.”

Describing such persons as “purveyors of chaos”, she called on Ghanaians to take great pride in the three decades of uninterrupted constitutional rule under the Fourth Republican Constitution, which was adopted in 1992.

“The NCCE holds the view that having continuous constitutional rule for 30 years is a milestone that must be celebrated, recalling the chequered political history and the overthrow of three previous republican constitutions,” she remarked while speaking at a public lecture to kick-start the commemoration of this year’s Constitution Week across the country.

Acknowledging demands from various sections for a constitutional reform, Madam Addy appealed for “a comprehensive national debate” on the matter, while still stressing that it was the responsibility of every Ghanaian to defend and uphold the constitution.

“As citizens, we are all enjoined to uphold and defend the constitution, and resist any person or group of persons who seek to overturn or suspend it.

“At the same time, the constitution must evolve in order to remain relevant and continue to meet the aspirations of the people. This is why it is imperative that citizens form an integral part of any reform process.

“The framers of the constitution anticipated a time like this, and hence outlined clear procedures for amendments,” she noted.

Delivering the keynote address at the Accra lecture, Supreme Court judge, Justice Gabriel Pwamang, called on Ghanaians to build on the positive aspects of the constitution, while taking steps to bring in the necessary amendments.

Justice Pwamang, who served on the Constitutional Review Commission about ten years ago, called for a redoubling of efforts to introduce the amendments the key political parties agree on, such as the election of district chief executives.

The NCCE has rolled out a series of programmes across the country to mark the 30th anniversary of the adoption of the 1992 Constitution.

These include the public lecture in Accra delivered by Justice Pwamang.

Other activities include public discussions and engagement in each of the regional capitals under the theme: “After Three Decades of Democratic Rule under the 1992 Constitution: Revisiting the Agenda for Constitutional Reforms.”

Events are also scheduled for basic school pupils “to ignite the spirit of patriotism and respect for core national values such as discipline, trustworthiness, integrity and loyalty,” Ms. Addy said.

Probing absentee MPs wrong; posterity will remember me for attempt to block it

How I saw Sandra’s n€ked photo on my husband’s phone – Lilwin’s former wife speaks, says she’s ready to curse her if she denies

‘See Something, Say Something’ Campaign Launched |