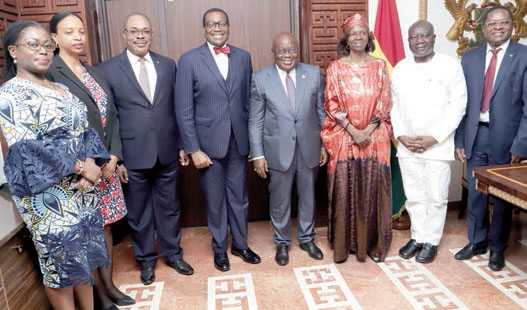 PRESIDENT AKUFO-Addo has expressed worry about Africa’s continuous dependence on foreign aid for its development agenda.

He is of the firm belief that the continent must not rely on external development assistance for its development, but find ways to expand the capital base of regional financial institutions like the African Development Fund (ADF), to make them significant in the scheme of affairs.

This was when the President of the African Development Bank (AfDB), Dr. Akinwumi Adesina, who was on day’s visit to Ghana ahead of the bank’s 2022 Annual Meetings, called on him at the Jubilee House yesterday.

The President therefore underscored the need for Africa to be dependent on its own financial resources for sustainable development.

He was of the opinion that the World Bank, which finances more activities in Africa, ought not to be at the forefront of the continent’s development.

“The statement that the World Bank gives more money, finances more activities than regional financial institutions like the ADF on the continent is not a comforting one,” he said.

Instead, he said, “I think that we should be in the lead and the World Bank supports, but not the other way round…and that therefore requires that we all focus on how best we can to expand the capital base of the AfDB and the ADF to give them a greater significance in terms of being able to raise money on the global bond market so we can play the lead role in financing our development.”

The President described as laudable, the idea of holding the conference outside the Ivorian capital, Abidjan, where the AfDB headquarters is based, saying it would give Ghana the necessary exposure, and that having the annual meetings in Ghana and having significant African leaders attending would ensure that “a big case is made for the need to mobilise more resources for the ADF.”

The meetings, which would be attended by a number of African leaders, will be held under the theme: “Achieving Climate Resilience and a Just Energy Transition for Africa.”

It will address climate change and energy transition challenges of the continent.

On his part, President of the (AfDB), Dr. Akinwumi Adesina, said the bank through the African Development Fund (ADF), plans to make a strong case to be allowed to use the equity of ADF to go to the market to raise resources to support the developmental agenda of the African continent.

So far, he indicated that the ADF has provided about USD$45 million dollars to support developmental projects in low income countries and going forward, the bank will seek to shore-up its support for Africa.

He described this year’s meeting as special as it also mark the 50th anniversary of the African Development Fund.

Apart from President Akufo-Addo, who is the host head of state, some 10 other Presidents are said to have confirmed their participation in the annual meeting, including President of Senegal and Chairman of the African Union, Macky Sall; President of Nigeria, Muhammadu Buhari; President of Côte d’Ivoire, Alassane Dramane Ouattara; and President of Rwanda, Paul Kagame.

The meeting is the bank’s most important event of the year.

They are usually said to attract some 3,000 delegates, bringing together the bank’s leadership and shareholders to take stock of the institution’s progress.

African leaders will discuss the nature of the support they need from global development partners, as well as the estimated cost of building resilience and a just energy transition for their economies.

As part of his visit, the AfDB Group chief will visit the new Pokuase four-tier road interchange financed by the African Development Bank as part of the multicomponent Accra Urban Transport Project.

Completed in 2021, the Pokuase interchange is the first of its kind in West Africa.