The Deputy Minister for Lands and Natural resources, in charge of Lands and Forestry, Mr. Benito Owusu-Bio has announced that government through the outfit will henceforth approach the fight against illegal logging and chainsaw operations in the same measure as galamsey is being dealt with.

Mr. Owusu-Bio told the media when he led a team on a fact-finding Mission on Thursday, 13th January 2022 to ascertain the veracity or otherwise of claims of illegal mining and logging ongoing in some forest reserves in Sefwi Wiawso of the Western North Region.

Mr. Benito accompanied by officers and Board Members of the Forestry Commission and the Sefwi Wiawso Omanhene, visited a number of these reserves in Tanoso Shen, Asanti Nkae and Kokooso to see for himself the extent of illegalities in the area.

On arrival to some three illegal sawmill setups close to the forest reserves and owned by the operators, the Deputy Minister ordered for the immediate demolishing of the structures and seizure of all movable equipment at the grounds.

He bemoaned that having witnessed the gravity of the illegal logging and chainsaw operations, he believes that they cannot solve such a canker in just one visit and gave the assurance that his outfit and the Board will make arrangements to visit the region again to ensure that they allay the fears of the Forestry officials and send out a stern warning to the operators.

He said “We are going to put together strategies, and we will be back again and this time it will not be only to Sefwi but to Ahafo and all the other places where these illegal loggers hide, we will burn all these if we have to, just to ensure that we bring their operations to the barest minimum”.

Speaking to the media, the Member of Parliament for Atwima-Nwabiagya North constituency, Mr. Owusu-Bio applauded the officials, especially the Youth In Afforestation team, for their efforts and support to the Commission so far.

He further disclosed that Government has given the clearance to employ more officials to help in the fight, and soon they will have more forest guards and rangers to join the combat.

He also sent out a piece of advice to Forestry officials in the area and farm owners to guard and prevent the reserves from wildfires in this dry season.

“We are in the dry season, and therefore we must beware of bush fires. To the farmers, be sure not to set fires whatsoever because they can turn into bigger fires, putting our reserves in danger.” 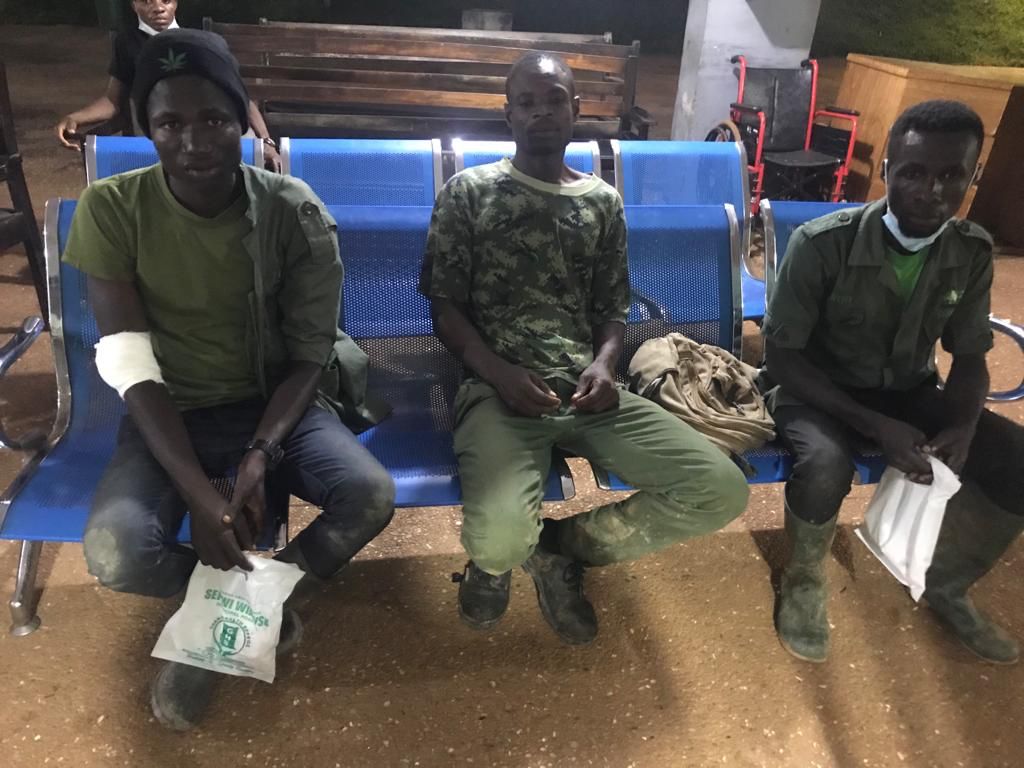 The District Manager of the Sefwi Wiawso Forestry Commission, Mr. Raymond Obeng Boamah, on his part disclosed that there are three main illegal activities happening in the reserves,” and they include illegal logging, illegal chainsawing, and illegal farming is also prevalent here.”.

He explained that the illegal operators are dangerous, armed to the teeth and operate with impunity.

“These guys who operate in the reserves are armed with all sort of weapons, being guns, machetes and all other means that they use to perpetuate their crime.”

“Anytime our officials confiscated any of their machines, they go to the extent of beating them up and kidnapping them to use as ransom to get back their equipment,” he added.

Mr. Obeng said their activities are really degrading the forest reserves and if something is not done immediately, it will soon deplete the entire reserve.

He also mentioned that their pressing request is for safety and pleaded with the Board and Deputy Minister to bring in the assistance of the police and the military and also beef up their guards and rangers.

The manager again disclosed that there had recently been a struggle among these illegal operators which led to the death of one of the illegal loggers, whose name and identity is not known.

Due to the bloodshed around the reserves, the Omanhene who was on the trip ordered for purification rights to be performed before the team entered the reserve for the inspections.

The Sefwi Wiawso District Forest Reserve has an area of 8,442 hectares with a total perimeter of 49.5 kilometres in the Western North Region.