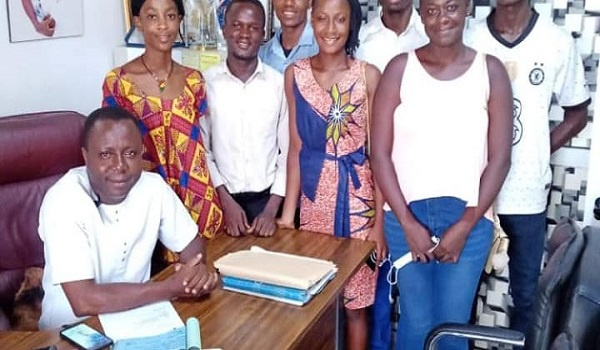 Crime Check Foundation (CCF) has paid the fees of some brilliant but needy tertiary students.

The gesture is part of CCF’s Educational Support Series to support needy students with funding from its donors.

They were supported through the contribution of Rachel Ampiah, US, Eric Acheampong, US, Agnes Twumasi, Ann Donkor, and an anonymous donor based in New York.

Sharing their stories, a new beneficiary, Gifty Krampa said though she had excelled in her West African Secondary School Certificate Examination (WASSCE), and had gained admission to the 37 Military Midwifery and Nursing College, her parents asked her to abandon the school for that year and work for some years because they could not afford the admission fee.

“After Senior High School, I taught in a private basic school, and with the savings I made, I was able to buy admission forms and paid for other things to facilitate my admission. When I told my parents I had gained admission to the school, they became sad because they did not have money to pay for my entry into the school,” she said.

“I reached out to my uncle for support but he also said he was stranded. Luckily, a former beneficiary of CCF’s Educational Support Series who happened to be my senior back in school asked me to seek support from CCF. When I got CCF’s contact I became hopeful that I will, by all means, enter the college,” she added.

Another new beneficiary, Kingsford Inkoom, who is a continuing student of the Takoradi Technical University said, “I could not afford fees for my next level at the University that is why I knocked on the doors of CCF for help. Due to that, I have not been given access to my results for the first year.”

After receiving monies to pay their fees, they thanked CCF and the donors for coming to their aid.

“May God bless you for giving us hope. If not for your support we would not have been able to go to school. We are very grateful,” they said.

Apart from paying their fees, CCF gave them food items including, cooking oil, noodles, mini bags of rice, biscuits, and some bathing soaps and detergents to make their stay in school less stressful.