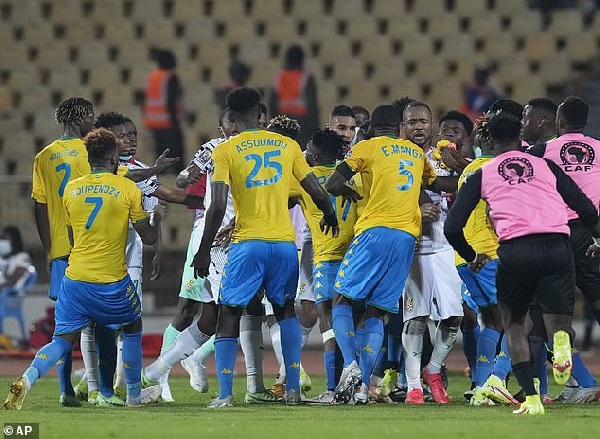 Ghana and Gabon players get into it after the final whistle

Gabon score late equaliser to draw with Ghana in AFCON 2021

We are disappointed- Baba Rahman after Gabon draw

Black Stars left-back, Baba Rahman has explained that the brawl that occurred right after the final whistle of Ghana’s draw against Gabon was due to a handshake.

According to Rahman, the Gabon players tried exchanging pleasantries with the Black Stars players but the latter rejected it, claiming Gabon did not honour their part of fair play during the game.

Fair play, FIFA’s slogan, which means playing by the rules and laws governing, while respecting teammates, opponents, match officials, and other stakeholders of the game.

During the Ghana-Gabon match in the Africa Cup of Nations, the Panthers scored a 90th-minute equaliser after failing to hand the ball that was initially kicked by Ghana defender, Alexander Djiku to receive treatment on the field.

Baba Rahman blamed the draw on Gabon not playing to the laws.

“It’s about Fair play but I don’t blame them because it was during the 90th minutes and on 90 minutes, I don’t think any team will play fairly. I think it’s fair play that cost us.”

“The equaliser came in the dying moments so I think we gave it out so cheaply.”

When asked about the cause of the scuffle that occurred after the game, the Reading left-back explained: “I think some Gabonese players tried to shake hands with our players. But if you don’t play fair play why do you want to shake my hands at the end of the game. We are really disappointed because we came here for the three points.

Ghana following the draw sit third in Group C with 1 point after two games while Gabon are second with 4 points, 2 points behind leaders Morocco who are on 6 points. Comoros are fourth with 0 points.