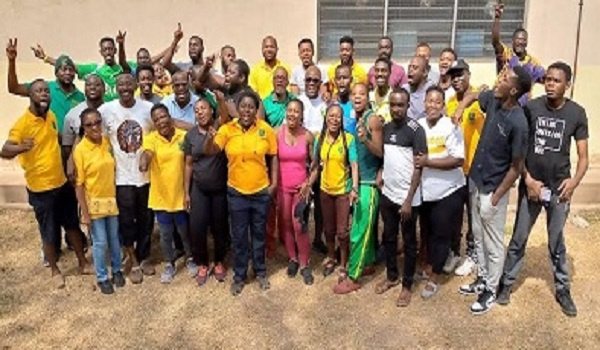 The health walk was meant to bring the members together

Members of the Old Mawuli Students Union (OMSU) on Saturday took part in a nine-kilometer walk on the streets of Ho.

The walk which was under the auspices of the Ho chapter of the union was led by the Global President of OMSU, Mr. Emmanuel Kafui Dzamefe.

Speaking to the Times Sports, after the walk which ended on the Mawuli School campus, Mr. Dzamefe said that the event was meant to bring members of the group together and share ideas on how to help their alma mater to attain greater laurels.

According to him, the walk was also to make the OMSU members active and build a strong bond of solidarity among them.

“We must meet on regular basis, build a strong fraternity with healthy activities such as the walk and support the progress of our school,” he added.

For that matter, Mr. Dzamefe said that the walk would be sustained.

According to him, the Ho OMSU chapter’s priority was to embark on a hearty crusade to increase the union’s membership and establish strong centres in tertiary institutions in the Volta Region.

“We must form an awesome team to move Mawuli School forward on a stunning note,” Mr. Dzamefe stated.