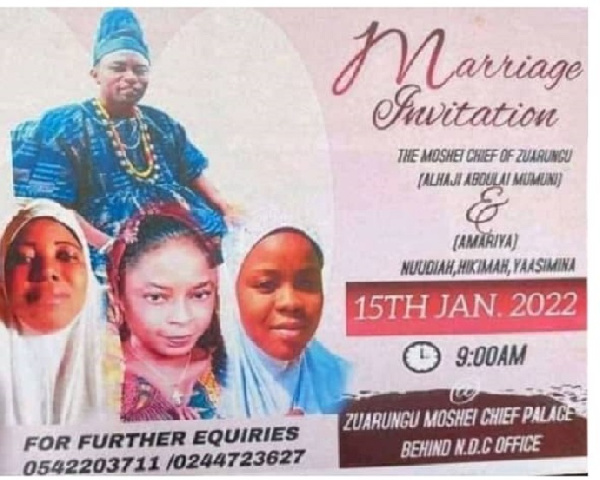 Ghanaian chief set to wed 3 wives at once

I started planning it in 2020 , chief explains

Following news and a poster that advertised his pending marriage ceremony to three women on the same day, the Chief of Zuarungu Moshei in the Bolgatanga East District of the Upper East Region, Alhaji Abdulai Mumuni, has finally confirmed all the rumours, providing explanations.

According to A1radioonline.com, he explained that this decision is a way of cutting down cost, stressing how he looks forward to the ceremony on Saturday, January 15, 2022.

Alhaji Abdulai Mumuni also explained that it has taken him over two years to put all of this together.

“I started planning this thing in 2020. And here we are, yes, I’m happy. But I must say that in everything we do as humans, we always put Allah first, so I will say that it is Allah’s grace and mercifulness,” he said.

The ceremony, which will become a historic one in the region, will however follow in the example of a similar one that happened in the North East region some time ago, and Alhaji Mumuni is excited about it.

“I will not say I’m the first person to do such a ceremony. A similar thing happened in Walewale. So, it is not something that’s too big, so, I call on friends and family members to join me that day,” he said.

Alhaji Abdulai Mumuni and his brides will be married under the Islamic wedding at his palace in Zuarungu.