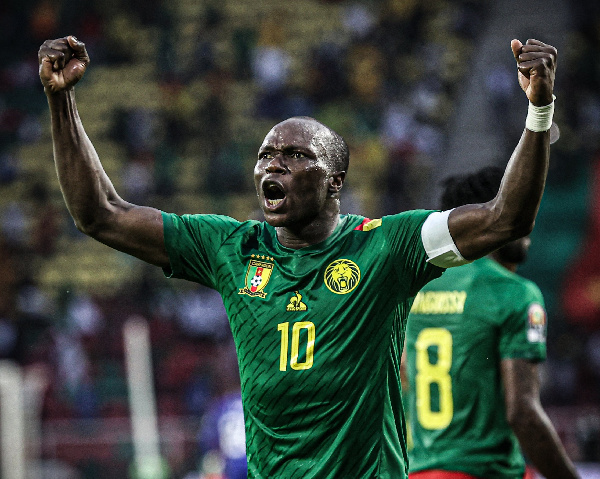 Cameroon came from behind to beat Ethiopia in their second group game in the ongoing 2021 Africa Cup of Nation, becoming the first country to qualify for the round 16 stage.

The host nation thrashed the Walias 4-1 at the Paul Biya Stadium on Thursday, January 13, 2022. The tournament’s top scorer, Vincent Aboubakar increased his tally by netting two goals as Karl Toko Ekambi also scored a brace to secure the early qualification.

Cameroon have now won back-to-back opening group games at the AFCON for the first time since 2006.

Ethiopia scored first through Dawa Hotessa who put the East African side in the lead, connecting a cross from the right after just four minutes into the game.

Both sides could not add more to the score in the first even after scoring early as it ended one apiece.

The second department saw the most goals when Cameroon skipper Aboubakar put the host in the lead on the 53rd minutes with a beautiful header. Fai recorded his second assist in the game with yet another teasing ball from the right.

Aboubakar scored his second in the match 2 minutes later after tapping in a square ball by Nicolas Ngamaleu.

Cameroon put the match to bed 7 minutes after the hour mark with a counter break that saw Ekambi on the end of it. The Lyon forward cut inside before putting the ball past the goalkeeper.

The Indomitable Lions went on to secure their place in the next round with the big win.

Meanwhile, Vincent Aboubakar who has now scored four goals in two games has become the first Cameroonian to score in three consecutive AFCON games since Samuel Eto’o in 2008.