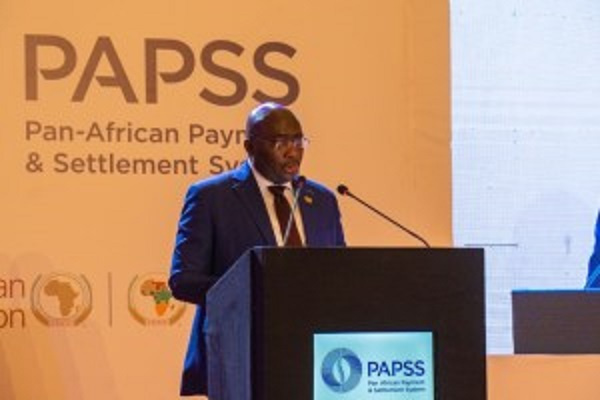 With PAPSS there would be no foreign exchange complications in intra-Africa trade, Bawumia

Bawumia commends AfCFTA and Afreximbank for the establishment of PAPSS

According to Dr Bawumia, the cooperation of all central banks in the continent was needed to successfully implement PAPSS.

The vice president who said this during the launch of PAPSS in Accra added that the successful implementation of the payment system would enhance intra-African trade, leading to a growth in economic activities and thereby an improvement in the livelihood of Africans.

“As you are all aware, the underlying motive behind our integration scheme is the expectation that, through collaborative efforts, participating countries in the integration programmes would generate maximum socio-economic benefits for their citizens in the sub-region.

“Regional integration, undoubtedly, is an efficient tool for overcoming the constraints imposed by the nature and size of individual national markets,” he was quoted by asaaseradio.com.

The vice-president said with 42 currencies and four exchange rate systems of 55 African countries there is often a lack of currency convertibility and ill-liquidity, which often discouraged intra-African trade.

He said PAPSS would bring speed, simplicity and security that would improve the capabilities of the participating countries, increasing access to new African markets with less costly foreign exchange complications.

This efficient and transparent payment system, Dr Bawumia said, would benefit all stakeholders from governments, banks and payment providers as well as customers, corporates, small enterprises and individuals.

“It is in this regard that I applaud the AfCFTA and Afreximbank for initiating the Pan-African payment and settlement (PAPSS),” he said.

“And I am sure you will agree with me that with the launch of the PAPSS, the building blocks of the AfCFTA are progressively falling into place,” he added.