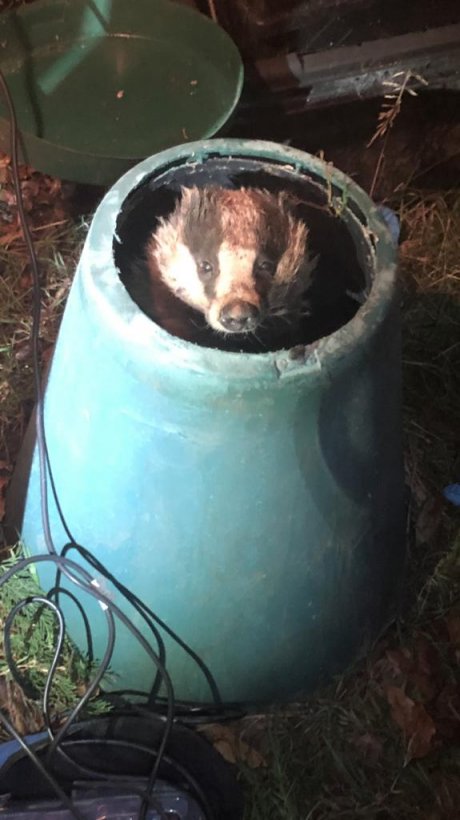 The RSPCA was called to a garden in Guildford, England, to rescue a badger that climbed into a compost bin and ate too much to fit back through the container’s opening. Photo courtesy of the RSPCA

Dec. 30 (UPI) — Animal rescuers in Britain rescued a portly badger that feasted on the contents of a resident’s compost bin and then discovered it was too big to climb out.

The RSPCA said Animal Rescue Officer Louis Horton was summoned to a Guildford, Surrey, England, home when a resident reported a badger was stuck inside their plastic compost bin.

“The green plastic compost bin would normally have a lid secured on top, but this inquisitive and hungry badger had spotted an opportunity for what he thought would be an easy meal and clambered in through the open top,” Horton said.

“The bin was set firm into the ground and his belly was a little bigger than anticipated, so the greedy chap soon realized he was stuck inside,” the rescuer said.

Horton said he used power tools to carefully cut off the top of the compost bin so the badger could be lifted out.

The badger was taken to the Wildlife Aid Foundation in Leatherhead for a veterinary check-up before being released back into the resident’s garden.

“It’s always so lovely when we get to rescue an animal, check they’re OK and then release them back to where they belong. It’s why we all do this job,” Horton said.