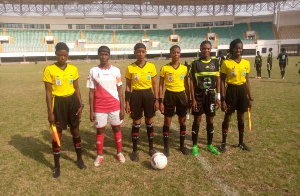 PearlPia Ladies scored two first goals and one in the second half to condemn FC Savannah to a 3-0 defeat on Match Day two of the Women’s Premier League at the Aliu Mahama stadium.

Iddrisu Mariam, Shahadu Rasheda and Bakari Safia scored to ensure that Pearlpia Ladies FC made it two wins from two matches to maintain their perfect start to the 2021/22 Women’s Premier League (WPL) season.

Playing at their favourite Aliu Mahama stadium in Tamale – both teams had a great chance to win the three points as they played in front of their fans.

Pearl Pia Ladies FC lived up to the billing as Iddrisu Mariam and Shahdu Rasheda found the target on the 12th and 45th minutes in the first half to give them a 2-0 cushioning in the first half.

Bakari Safia later added the third goal in the 88th minute as she scored an own goal to complete the rout for Pearlpia Ladies FC.

With this win, PearlPia Ladies have moved to the top of the Northern Zone League log with 6 points –three points richer than FC Savannah who won away in the opening weekend of the season. Pearlpia Ladies FC looked very strong in attack and at the back as well and well composed in the middle.

Head Coach for Pearlpia Ladies FC Baba Nuhu Mallam commended his players after the game and encouraged them to maintain their focus and determination.