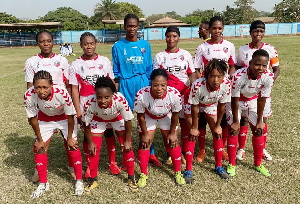 Ghana’s Women Premier League side, Pearlpia Ladies were attacked by a gang of armed robbers while travelling in a bus after their match on Monday night.

Pearlpia Ladies who defeated Ampem Darkoa 1-0 on the open day of the league were making their way home to Tamale from Techiman in a white sprinter bus when the armed robbers gave them a goose chase.

The bus windshield was shot three times by the robbers but the bullets failed to penetrate.

The robbers who had sensed danger fled the scene without their booty after scaring the ladies.

She tweeted, “I just spoke to head coach of Pearlpia Ladies, Mallam Nuhu who confirmed that their bus was attacked by armed robbers on their way to Tamale from Techiman after honouring the women’s premier league match against Ampem Darkoa Ladies.”

According to a statement from the club on their Twitter page, no one was injured in the process.

“Thanks to ALLAH for surviving the Armed Robbery attack. None of us was injured,” Pearlpia Ladies tweeted.