Milovan Rajevac to include David Abagna in AFCON provisional squad 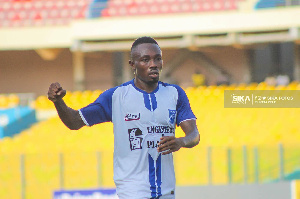 David Abagna worried about not getting National team call-ups

Real Tamale United midfielder, David Abanga, has been reportedly included in the Black Stars provisional list for the 2021 African Cup of Nations(AFCON).

The midfielder has been in fine form and could make the squad that will depart Ghana on Wednesday, December 22, 2021, to Qatar for pre-AFCON camping, a report by Akoma FM suggests.

Abagna is currently leading the goal king chat in the Ghana Premier League with 8 goals in 9 matches.

He has scored twice of the goals scored by the rest of his teammates combined.

David Abgna in recent interviews expressed his frustration about being overlooked regard national team call-up despite his efforts.

“When I was at Ashgold, I had better statistics but when the local Black Stars [players] were being called, Yaw Annor was the one invited. Even himself and my own teammates were surprised.” He told Accra based Angel FM

“I am not to determine what criteria they should be used to make the call ups, the big people and the technical people up there know how they do their own thing,” he added.

Meanwhile, another report claim that there are four local-based players who could make the soon to be revels list which includes, Hearts of Oak Richard Attah, Asante Kotoko’s Ismail Ganiyu and Dreams FC duo, Fatawu Mohammed and Philemon Baffour.