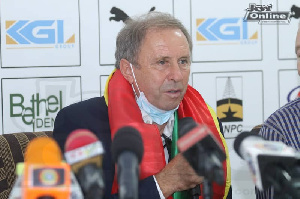 Ghana to play Algeria in a friendly

Ghana’s to train behind closed doors in Qatar

Black Stars management member, George Amoako has confirmed that Ghana coach Milovan Rajevac will announce a provisional list for the 2021 Africa Cup of Nations on December 16, 2021.

Amoako said the management committee held a meeting on Tuesday, December 14, 2021, to deliberate on the list submitted by the gaffer.

The squad is expected to see surprise names included and will be trimmed down to 25 for the tournament in Cameroon.

“The coach is expected to name a provisional squad tomorrow. Yes, Milo has indeed requested additional backroom staff, the management committee sat on it yesterday and discussed it, I can’t reveal what exactly he wants but we will update Ghanaians when the agreement is reached.” George Amoako told Akoma FM.

The football administrator also talked about the team’s camping in Qatar as the Black Stars look to have an intensive preparation ahead of the competition.

“Black stars will leave Ghana on 22nd December 2021 for Doha and all our training will be held behind closed doors,” He ended.

Ghana is said to have pencilled three friendlies including one against AFCON title holders Algeria a few days before the tournament commences.

The Black Stars are in Group C alongside Morocco, Comoros, Gabon. Ghana will begin its journey to a fifth AFCON title against Morocco.

The West African giant last won the competition in 1982 and have since been to the finals three times.