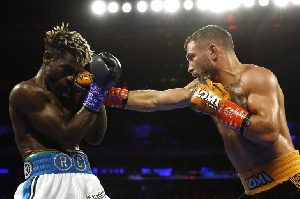 Richard Commey was knocked by Lomachenko in round 7

Richard Commey apologizes to Ghanaians for letting them down

Lomachenko, 33, dropped Commey to the canvas in the 7th round but the Ghanaian was able to beat the count and continue till the end of the fight.

The Ukrainian boxer went ahead to secure a victory by unanimous decision to inch closer to reclaiming his lost titles at Madison Square Garden in New York.

After the fight, the undisputed pound-for-pound boxer described Commey as a boxer with an enduring heart of a warrior.

According to him, he signalled Commey’s corner to throw in the towel because he thought there was no chance for the Ghanaian to make it to the last 5 rounds.

“I saw his situation it was very hard for him, that is why I said stop the fight,” Lomachenko said when he was interviewed in the ring after the fight.

He added, “But he [Commey] is a true warrior, he has a warrior’s heart. We continued and we showed to the people twelve great rounds.”