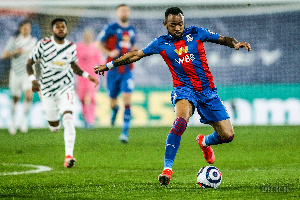 The Ghana international was one of the Eagles’ star performers as they thumped Rafael Benitez’s men at Selhurst Park.

Heading into the clash, Patrick Vieira’s men were hoping to end their three-game losing streak, while the Toffees were still basking in the excitement of their 2-1 win over Arsenal last time out.

As it proved to be an eventful day for Palace, they took control of the game from the blast of the referee’s whistle.

Ayew was the first to crack Everton defence, as Odsonne Edouard’s snarled the ball forwards through a row of bodies. Meeting it on the half-volley, his shot was driven low but blocked by the feet of Jordan Pickford.

A few minutes before the half-time break, the host got the breakthrough as a loose ball from Demarai Gray was pounced upon by the Black Star – who set up Conor Gallagher to fire home.

Two minutes after the hour mark, James Tomkins doubled the advantage thanks to an assist from Will Hughes. Eight minutes later, the visitors pulled one back with Salomon Rondon beating goalkeeper Vicente Guaita.

With what appeared like the last kick of the match, Gallagher completed his double as Everton returned home with heads bowed low.

Ayew was on parade from start to finish alongside Senegal’s Cheikhou Kouyate, Wilfried Zaha and his compatriot Marc Guehi. Whereas, Anglo-Nigeria Eberechi Eze was an unused substitute.

On the other hand, Alex Iwobi was kept on the bench from start to finish as well as Cote d’Ivoire’s Jean-Philippe Gbamin.

A delighted Vieira lauded the fans for their impact against the Goodison Park giants.

“We stuck together through a difficult period, but we felt the support from the fans. This is a really special football club, and the fans make the football club special,” he told Sky Sports after the game.

“We know what we are capable of doing. We played some really good football in the first half. We will enjoy the win, but we have a game that we have to work over first and to try and perform and to try and win.

“To play at home is a plus, especially when you look at the atmosphere today. We will be ready for the challenge.”

Ayew would be hoping to maintain this form as he is expected to play a key role in Ghana’s 2021 Africa Cup of Nations campaign in Cameroon.

Although Iwobi was not played due to unknown reasons, he remains a key figure in the Nigeria squad – who are keen on emerging as African champions for the fourth time ever.