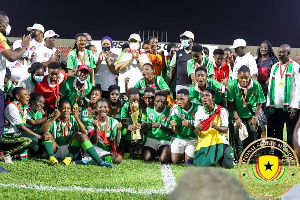 Ghana’s reigning queens of women football, Hasaacas Ladies, bagged their sixth trophy for the year after beating Ampem Darkoa Ladies 4-3 on penalties to lift the trophy for the maiden edition of the First Lady’s Cup.

The match, played at the Accra Sports Stadium, was graced with the presence of the First Lady, Mrs. Rebecca Akuffo Addo, the Second Lady, Mrs. Samira Bawumia, and other ministers of state.

Ampem Darkoa Ladies who looked more composed and determined to win the day mounted countless pressure on their opponents at the beginning of the game until Sonia Opoku took the lead for Ampem Darkoa after she reacted to a cross which left Hasaacas’s goalie confused.

Hasaacas Ladies in the quest to equalize created lots of chances but the defense of Ampem Darkoa ladies made things difficult for them.

SWAG female footballer of the year contender, Jafaru Rahama of Hasaacas Ladies finally managed to bring the game to a draw in the 66th minute of the game she beautifully placed the ball at the right corner of the net.

Hasaacas ladies kept on pouncing on Ampem Darkoa Ladies till referee Juliet Appiah blew the final whistle for a penalty shootout which ended 4-3 in favour of Hasaacas Ladies.